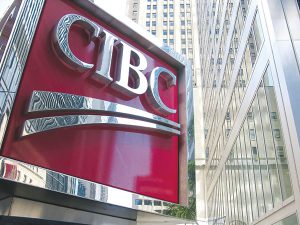 Canadian Imperial Bank of Commerce (CIBC) named Chief Risk Officer Shawn Beber as the new head of its US division and tapped Susan Rimmer to lead the company’s global corporate and investment banking franchise.
Current US chief Mike Capatides will take over as the bank’s vice chair in the country when the changes become effective on November 1, the Toronto-based bank said in a statement. Roman Dubczak, who now leads global investment banking, was named deputy chair for capital markets, according to an internal memo from Chief Executive Officer Victor Dodig.
CIBC is counting on the US for a major portion of its growth in the years ahead, building on its $5 billion acquisition of Chicago-based wealth manager and business lender PrivateBancorp Inc. in 2017. The strategy is focused on getting CIBC’s commercial-banking, capital-markets and wealth-management units to work together to serve the country’s entrepreneurs.
Beber has previously worked as CIBC’s general counsel and led its US capital-markets business and as well as strategy and corporate development. He will be based in Chicago. Capatides has been with the bank for more than 25 years, working as chief administrative officer and general counsel, among other roles.
Frank Guse, currently executive vice president for strategy and transformation in personal and business banking, will take over as chief risk officer.
Rimmer was most recently head of global corporate banking and previously led the bank’s debt capital-markets business. She’ll report to Harry Culham, head of CIBC Capital Markets. Dubczak has been with CIBC for about 30 years and has led its global equities, equity capital markets and corporate debt-origination businesses.
Kevin Li was appointed head of global investment banking, while Eric Metivier was named head of global corporate banking. Both executives will report to Rimmer.
CIBC rises 1.3% to C$62.37 at 9:35 am in Toronto. The shares have slid 15% this year, compared with an 11% drop for the S&P/TSX Commercial Banks Index.