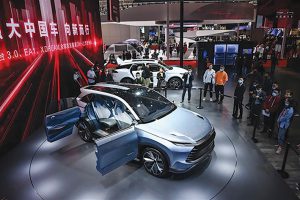 Tesla Inc. would have delivered more cars in the most recent quarter but for a shortage of boats. It’s having problems finding vessel capacity out of Shanghai. No wonder: China recently overtook Germany as the world’s second-largest auto exporter.

China’s auto exports rose over 50% in the first nine months of this year, shipping out over 2 million vehicles. This isn’t just western automakers using China as an export hub; homegrown brands are also finding their footing on the world stage. And demand is being led by Europe, the birthplace of the automobile, where a supply-chain crunch, energy crisis and war in Ukraine continue to hamstring manufacturers.

The threat is about more than price. Chinese-built autos are of far superior quality to those it tried to foist on European consumers over a decade and a half ago. Europe’s automakers are already losing market share in China due to a lack of competitive electric vehicles, and they risk doing so at home too, where Chinese carmakers already account for 5% of the EV market.

European politicians mustn’t be naïve but they should be wary of wielding a big stick: Harsh new trade barriers on China would raise the cost of electric vehicles while lessening pressure on European automakers to boost their competitiveness.

China’s automakers are making inroads after spending years preparing to meet growing demand for electric vehicles and the batteries that power them. Automakers globally are partnering with Chinese battery makers to power their EV fleets.

Thanks in part to government largesse and an industrial policy that favored domestic producers, Chinese EV brands dominate their rapidly growing local market, where they are looking to cut prices, which will further boost adoption.

They’ve also pulled ahead in the software and infotainment features Chinese consumers demand. With the exception of Tesla, western automakers have often failed to keep up.

The opportunity for China is clear: Brand loyalty has yet to become firmly established in electric vehicles and current battery-powered models are often very expensive. Western automakers have deliberately neglected the budget end of the European market, believing that high prices, not high sales volumes, will deliver superior profit margins.

Chinese companies are now capitalizing on their economies of scale to ship competitively priced cars to Europe. The scale of China’s ambitions was on full display at the Paris Motor Show in October where brands such as Berkshire Hathaway Inc.-backed BYD Co. and Great Wall Motor Co. touted several technically impressive models.

However, there’s still a lot of work to better establish Chinese brands, dealer networks and service centers. Deals like the one BYD struck in October with German rental-car company Sixt SE to buy around 100,000 EVs, will help build consumer awareness.

Not surprisingly, Chinese-acquired western brands such as MG and Polestar have been the most successful. (MG is owned by SAIC Motor Corp. while Polestar is financially backed by Zhejiang Geely Holding Group Co.).

China’s advance presents a thorny problem for European politicians, who are under pressure to ensure a level playing field. Currently, car imports into China face a 15% tariff compared to 10% when going into the European Union.

Europe is already worried about deindustrialization due to its sky-high energy costs. There’s growing political concern too about the continent’s business dependence on China — a valuable trade partner but increasingly viewed as a strategic rival. The fate of industries like solar panels — where German consumers effectively subsidized the rise of Chinese manufacturers and domestic producers went bust — show the dangers of complacency.

While western automakers overcame competitive challenge from Japanese and Korean producers in the past, the threat is bigger this time because EVs are a new technology and China is years ahead in batteries and associated supply chains. The European Union reached a deal last week to ban sales of combustion-engine cars from 2035; so the continent’s manufacturers are stuck between a rock and a hard place.

It’s reasonable to prod Chinese manufacturers to set up local production as Beijing did with western carmakers. That might help Europe become more competitive and create manufacturing jobs here.