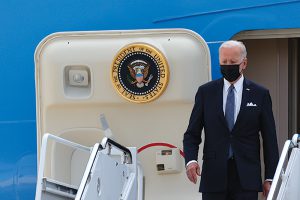 US President Joe Biden said that he wasn’t concerned about the possibility of North Korea holding a nuclear test while he’s in Asia.
“We are prepared for anything North Korea does,” Biden told reporters in Seoul. “We’ve thought through how we’d respond to whatever they do, and so I am not concerned.”
US intelligence has shown that North Korean leader Kim Jong-un — who’s currently facing a rampant Covid-19 outbreak — may be preparing to launch an intercontinental ballistic missile or conduct a nuclear test to coincide with Biden’s trip to the region. It would be Pyongyang’s first nuclear test since 2017.
Biden travelled to Japan after three days in South Korea, during which his team opted against a visit to the DMZ — the heavily fortified demilitarised zone separating the country from North Korea.
Before departing, he met with US and Korean service members at Osan Air Base, seeking to send a signal of joint power to adversaries.
Standing in front of a large map of the DMZ, Biden thanked Korean forces “for having our backs just as we have yours.”
“You are the front line, right here in this room,” he said.
Biden said he’d consider holding talks with Kim only if he was convinced the North Korean leader was prepared to meet in good faith.
“With regard to whether I would meet with the leader of North Korea, that would depend on whether he was
sincere and whether he was serious,”
Biden told reporters following a meeting with South Korean President Yoon Suk Yeol.
Asked what his message to Kim was, Biden said it was simply “hello” and that he had nothing else to add.
So far North Korea has rejected the Biden administration’s requests for talks without preconditions.
In February, an administration official ruled out a meeting between Kim and Biden at the time, saying it would need to have a clear purpose.
The prospects for a meeting remain slim. In addition to the high bar Biden set, Pyongyang hasn’t indicated any willingness to engage in meaningful discussions, National Security Adviser Jake Sullivan told reporters.
Biden and Yoon agreed to start talks on expanding joint military exercises aimed at countering the threat posed by North Korea.
North Korea for years has called the joint drills a prelude to an invasion and nuclear war, and threatened retaliation.
Kim has long sought to hold out the possibility of talks as a way to scale back the joint US-South Korea drills, something which former President Donald Trump controversially agreed to during his summits with Kim.