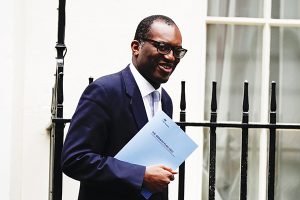 Liz Truss’s new UK government delivered the most sweeping tax cuts since 1972, slashing levies on rich households and companies in a bid to boost economic growth in a move that triggered a massive market selloff of the currency and bonds.
Chancellor of the Exchequer Kwasi Kwarteng announced a series of tax cuts and regulatory reforms that will cost £161 billion over the next five years. That fanned concerns about inflation, already near a 40-year high, and about a spiraling government debt burden.
The pound crashed below $1.11 for the first time since 1985, sliding 2% in addition to declines earlier in the week. Borrowing costs on five-year government bonds jumped the most for a single day on record as traders dumped UK assets.
“It is extremely unusual for a developed market currency to weaken at the same time as yields are rising sharply,” said George Saravelos, global head of foreign exchange research at Deutsche Bank AG. He warned the UK currency is “in danger” and suggested markets were treating it like a developing economy.
The package was more ambitious than expected, with a big giveaway for the UK’s wealthiest households and plans to tear up planning rules and reform financial regulations.
Kwarteng scrapped the 45% additional rate of income tax, paid by only the richest earners, leaving the top rate at 40%, and cut the basic rate from 20% to 19%. He paid only lip service to concerns about rising public debt, reiterating a pledge to “reduce debt as a percentage of GDP over the medium term.”
The Conservative administration hopes its program of lower taxes and deregulation will turbo-charge the economy, staving off a recession that the Bank of England says has already begun and shaking the UK out of a decade of weak growth.
Business groups embraced the decision, while economists said the measures may quickly become unaffordable. Unions and the Labour opposition said the measures will benefit the rich and do little to help those on moderate incomes with a tightening cost-of-living squeeze.
The opposition Labour party branded it “casino economics” and others warned that the government’s fiscal credibility now depended on whether it can hit its growth target. Kwarteng rejected that criticism.
“For too long in this country, we have indulged in a fight over redistribution,” the chancellor said. “We won’t apologize for managing the economy in a way that increases prosperity and living standards. Our entire focus is on making Britain more globally competitive.”
He set a target of 2.5% trend growth, a level not seen since before the 2008 financial crisis.
“We promised to prioritize growth,” he told Parliament in London on Friday. “We promised a new approach for a new era.”
The Treasury responded to concerns about high levels of borrowing needed to pay for his giveaway by promising new fiscal rules later this year that will ensure the debt falls as a share of national income “in the medium term.”
Kwarteng’s department also released figures suggesting stronger growth could lower borrowing by £40 billion. He said the numbers would be properly costed by the Office for Budget Responsibility.
The measures will deliver a massive fiscal stimulus at a time when the Bank of England is struggling to rein in inflation, which at 9.9% is almost five times its target.
The plunge in gilt markets means that investors are now betting the central bank boosts its benchmark lending rate a full percentage point to 3.25% in November, which would be the sharpest increase since 1989. It’s a sign that traders believe that the extra borrowing will do little for growth but drive up prices even more quickly.