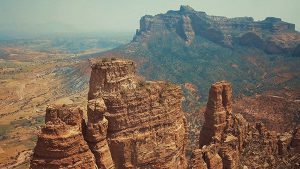 The leader of dissident Tigrayan fighters who’ve been battling Ethiopian federal troops for the past 13 months said he’d ordered a strategic withdrawal in a bid to end the nation’s civil war.
The announcement marks a significant development in the conflict and comes after government soldiers recaptured towns in the Afar and Amhara regions seized by
the Tigray People’s Liberation Front (TPLF) since June.
TPLF President Debretsion Gebremichael ordered his forces to retreat to within
the northern Tigray region’s borders.
“We have heard the unanimous international call for us to withdraw from neighbouring regions,” Debretsion said in a letter to United Nations Secretary-General Antonio Guterres seen by Bloomberg and verified by a TPLF official. “The government of Ethiopia has made the same call. We trust that our bold act will be a decisive opening for peace.”
Fighting erupted in Ethiopia in November 2020, when Prime Minister Abiy Ahmed ordered an incursion into Tigray after forces loyal to regional authorities attacked a federal army base. The showdown followed months of tension stemming from Abiy’s sidelining of the TPLF, previously the nation’s preeminent power broker, and has claimed thousands of lives and left millions of people in need of aid.
Debretsion said his forces remained intact and undefeated, though the conflict has brought enormous suffering to the people of Ethiopia and Eritrea. He called for all hostile aircraft to be barred from Tigrayan airspace, an international arms embargo to be imposed on Ethiopia and Eritrea, and for the UN Security Council to establish a mechanism to ensure an end to all hostilities.
A humanitarian corridor should also be set up to enable aid to be delivered to Tigray, while an all-inclusive dialog is needed in which all political parties and constituencies can participate and chart a way forward for the country, he said. The TPLF has no ambitions to install itself at the head of an Ethiopian government, but wants to ensure its constitutional rights are respected, he said.
Debretsion and Abiy’s offices didn’t immediately respond to requests for comment.