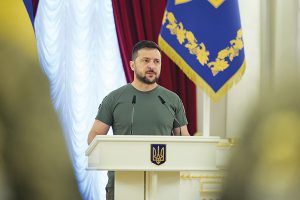 Russian leaders declared victory in a series of stage-managed, UN-condemned “referendums,” as the Kremlin moved to annex a large chunk of occupied Ukrainian territory after a string of humiliating military setbacks.
Dmitry Medvedev, deputy head of Russian Security Council, wrote on his official Telegram channel in the early hours of Wednesday that the referendums were over. “Results are clear,” he added. “Welcome home to Russia.”
Head of the self-styled Donetsk People’s Republic, Denis Pushilin, posted on Telegram that all ballots had now been counted in his region, with 99.23% of those polled voting to join the Russian Federation. Landslides were also recorded in the Kherson, Zaporizhzhia, and Luhansk regions, the state-owned Ria Novosti news agency reported.
Moscow’s declaration marks a new escalation in the war and the spiraling conflict between Russia and the US and its allies. The ballots have been condemned as a “violation of the UN Charter and international law” by United Nations Secretary-General Antonio Guterres.
Russian troops don’t fully control the territory of any of the four regions where the votes were held and fighting is raging in all of them.
The Kremlin ordered the ballots after its forces suffered their worst defeats to Ukraine’s military since the weeks after Russia invaded in February. Putin this week also called for a “partial mobilization” to draft 300,000 reservists.
Ukrainian President Volodomyr Zelenskiy rejected the results in a Wednesday statement on his official Facebook page. “None of Russia’s criminal actions will change anything for Ukraine,” he wrote. “This farce in the occupied territory cannot even be called an imitation of referendum.”