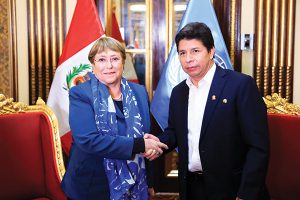 Peruvian lawmakers are closer to the 87 votes needed to oust President Pedro Castillo amid a judicial investigation into the head of state, according to an opposition legislator pushing for the removal.
A group of parties in Peru’s congress are writing a third impeachment motion against Castillo that could lead to his removal from office and his replacement with Vice President Dina Boluarte, congressman Edward Malaga, an independent centrist, said. The motion has the backing of 80 lawmakers so far and more are expected to join, he said, declining to provide details on the strategy.
“A limit has been reached,” Malaga said in Lima. “The moment for a truce is gone, Castillo doesn’t deserve another opportunity. He has to go.”
Since his inauguration a year ago, Castillo has faced an increasingly hostile congress as his popularity plunged. The president has already survived two impeachment attempts.
Now things are looking increasingly difficult for the leftist former school teacher who won the presidency after narrowly beating right-wing rival Keiko Fujimori. Peru’s top prosecutor is carrying out five preliminary investigations against Castillo, his family members and former aides, some of whom are fugitives, for allegedly participating in corruption.
In a sign of how strained his relationship with congress is, on Thursday evening lawmakers rejected Castillo’s request to travel to Colombia this weekend to attend the inauguration of Gustavo Petro. Some congressmen justified their vote by saying he could seek political asylum while abroad to avoid investigations at home.
Peru’s presidential office didn’t reply to requests for comment on Malaga’s remarks. Castillo has repeatedly denied wrongdoing. While the prosecutor can investigate but not charge a sitting president due to the immunity granted to the position, the case has hurt Castillo’s standing further.
Former president Francisco Sagasti has called for an early general election later this year, while conservatives in congress have pushed for the head of the congress to take over government after removing the president and vice president.
While previous impeachment bids were led by conservatives, this one is being organized by centrist groups with a potentially greater ability to generate consensus in congress.