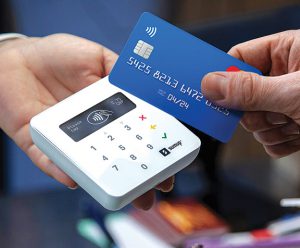 SumUp has achieved an 8 billion euro ($8.4 billion) valuation in its latest funding round, raising 590 million euros in a deal split between debt and equity in a bid to develop new products and gain clients.
Bloomberg News first reported in January that SumUp was considering raising a fresh round of funding. People with knowledge of the matter said at the time that SumUp could seek a valuation of about 20 billion euros based on early estimates.
Since then, Sequoia Capital and Lux Capital have both warned founders to focus on scaling back rather than targeting growth. However, significant fund raising has continued despite fears of a downturn. Personio, one of Germany’s largest startups, raised $200 million at a $8.5 billion valuation. Bain Capital led SumUp’s fundraising, according to a statement, with other firms such as BlackRock and Crestline also investing.
London-based SumUp provides card readers to 4 million small merchants such as taxi drivers and coffee shop owners in 35 countries across the world, who pay a small fee for the machine and then 1% to 1.5% of each transaction. It has also built out other services for merchants, such as business accounts and tools for invoicing.
Lending to companies with a negative cash flow is a growing phenomena in European private credit, with firms such as Sixth Street and Golub Capital providing so-called ARR facilities to a handful of smaller software firms with high-growth potential.
Providing debt to companies with solid recurring revenue but poor profitability means credit funds can finance companies with strong growth trajectories that still have negative cash-flows. Suitable firms are typically subscription businesses that provide in-house, well-integrated technology to companies, which can use the additional cash to ramp up marketing efforts and grow their businesses.
SumUp is unlike typical companies ARR lenders are interested in, in that it is not a subscription service. It spends money on marketing to grow its merchant-base, and aims to recover that marketing budget within 12 months from new clients, according to SumUp Chief Financial Officer Marc-Alexander Christ.
“We are still cash-burning, which is counter-intuitive for some lenders,” Christ said in an interview. “But the smartest in the market understand the concept of profitability before marketing spend, which gives them security to invest.”