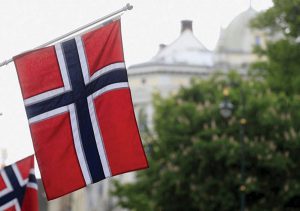 Norway’s exports surged to a record last year, helped by higher demand for fossil fuels, fish and metals.
Western Europe’s largest oil and gas exporter sold 1.38 trillion kroner ($156 billion) worth of goods abroad in 2021, a 77% increase that led to a full-year trade surplus of 531 billion kroner, also the highest ever, Statistics Norway said on Monday.
Higher fossil fuel prices are cementing the case for the central bank, one of the most hawkish in the developed world, to move ahead with a string of planned interest rate hikes despite the effect of new coronavirus-related restrictions. The krone, the third best performer in G-10 sphere of major currencies this year, strengthened after the news, gaining 0.1% to 9.9881 at 09:42 am in Oslo.
The value of natural gas exports more than quadrupled from 2020 to 475.8 billion kroner amid record-high gas prices. Gas exports hit another monthly record in December, rising 31% from the previous month. Oil revenues from abroad totalled 349.6 billion kroner, highest level since 2008.
Mainland exports surged 22% last year to another all-time high, led by oil products, electricity and metals. Fish exports, led by salmon, also hit a record in December and the full year.