Huawei declaring ‘business as usual’ after weathering US curbs 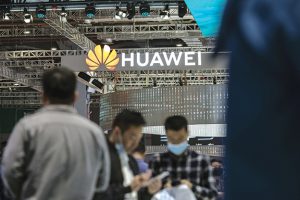 Huawei Technologies Co. posted its third straight quarter of growth, declaring a return to normalcy after overcoming a plethora of US restrictions this year.
The company’s sales rose 7.2% to $27.4 billion in the December quarter, according to Bloomberg’s calculations off annual figures, after carving out new income streams from areas such as smart cars and cloud services. 2022 sales stood at 636.9 billion yuan, the Shenzhen-based company said, up marginally from a year earlier.
Huawei is trying to open up new markets and businesses after US tech export restrictions gutted its smartphone business — briefly the world’s largest — and curtailed the sale of advanced gear in developed markets. Among those trade restrictions is a ban
on contract the chipmakers
producing semiconductors designed by Huawei, effectively kneecapping its HiSilicon
design business.
Huawei’s also sought out alternative sources of income by selling patents, technology services and wireless gear to new customers from automakers to coal mines and industrial parks. It began levying royalties from the world’s biggest smartphone brands, including Apple Inc. and Samsung Electronics Co.
The Chinese company has signed more than 20 patent license agreements in 2022, covering smartphones, connected vehicles, networking and the Internet of Things, according to Alan Fan, the company’s global head of IP.