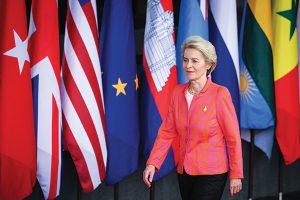 European Commission President Ursula von der Leyen suggested creating a special international court to probe Russian actions in Ukraine and using frozen Russian assets to help rebuild the nation.
The head of the European Union’s executive arm said the bloc would try to gather international support for a “specialised court backed by the United Nations to investigate and prosecute Russia’s crime of aggression.”
The aim would be to address crimes that wouldn’t fit under the mandate of the International Criminal Court.
“Under certain conditions, an ad hoc international tribunal for the crime of aggression may allow for the prosecution of the top Russian leaders who would otherwise enjoy immunity,” the commission wrote in a legal analysis.
“It could be based on a multinational treaty among supporting states, and its international character could be strengthened further with a UN mandate calling for its
establishment.”
In a video address posted on Twitter, von der Leyen also said the bloc would “find legal ways” to use money seized from Russia to help fund Ukraine’s reconstruction.
The EU has blocked some €300 billion ($311 billion)
in Russian central bank reserves and frozen around
€19 billion in assets held by sanctioned Russian businessmen, although these estimates aren’t complete.
She said the bloc would seek to create a structure to manage those funds, invest them, and use the proceeds to benefit Ukraine.
We will work with the ICC and help set up a specialised court to try Russia’s crimes.
EU lawyers had been asked to look at different legal options for using Russian assets frozen by its member states. Using Russian central bank assets wouldn’t be easy, but it’s doable with the strong backing of the international community, said EU officials who requested anonymity to discuss technical details. Even so, any such decision could have risks for financial stability and would require careful consideration, the officials added.
“It could be explored with international partners that have adopted similar sanctions whether an active management of frozen and ‘immobilised’ assets — in particular of liquid assets of state-owned enterprises and of the Russian Central Bank and affiliated entities — could be put in place under the CFSP, aiming at ensuring a stable and fair net return to be used, as external assigned revenue, to finance the reconstruction of Ukraine,” the commission wrote in a legal paper, referring to the EU’s Common Foreign and Security Policy.
“To that effect, appropriate financial instruments would need to be set up, preferably at international level.”
It’s unclear whether the US or other allies would take part because confiscating central bank assets is a potential legal minefield.
In May, US Treasury officials had expressed concern about setting a precedent that would discourage other foreign central banks from parking their assets in the US.