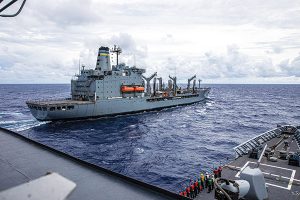 China fired its largest missile tests in Taiwan’s waters in decades, the day after US House Speaker Nancy Pelosi defied Beijing by visiting the self-ruled island it claims as its own.
The People’s Liberation Army fired 11 Dongfeng ballistic missiles into waters north, east and south of Taiwan between 13:56 p.m. and 16:00 p.m. local time Thursday, the island’s Defense Ministry said in a statement. Sun Li-fang, a ministry spokesman, earlier said missiles had been fired from land.
It was unclear which location the missiles were fired from and if any went over Taiwan. China has never sent missiles over the island before and such a move would be a provocative escalation. Taiwan’s defense ministry declined to comment on that point.
China also sent long-range rockets near the northwestern outlying islands of Matsu and Dongyin, and Wuqiu in the west, Taiwan confirmed. Its defense ministry said it had strengthened its guard around the islands, which are located closer to China’s coastline than Taiwan.
Secretary of State Antony Blinken said the US had engaged Chinese counterparts in recent days at “every level of government” to convey a message of restraint after Pelosi’s trip, which Beijing has called “an infringement on China’s sovereignty and territorial integrity.”
“We, and countries around the world, believe that escalation serves no one and could have unintended consequences that serve no one’s interests,” Blinken said Thursday, on the sidelines of an Association of Southeast Asian Nations summit in Cambodia.
Earlier in the day, China said an unspecified number of its missiles had accurately hit targets in seas east of Taiwan. The Eastern Military Command of the People’s Liberation Army said in a statement it had completed live-fire training, and lifted relevant air and sea controls.
The statement didn’t clarify whether that meant all military exercises had ended in six exclusion zones surrounding the island, which began at noon on Thursday and were set to last for 72 hours. At a regular briefing Thursday, Chinese Foreign Ministry spokeswoman Hua Chunying said she didn’t have information on whether all the drills had ended, and referred reporters back to the original Aug. 4-7 timeframe.
People’s Daily, the mouthpiece of the Chinese Communist Party, said on its official Twitter account that sea and airspace controls off the eastern coast of Taiwan had been lifted.
China earlier this week warned airlines to avoid “danger zones” around Taiwan after it announced its most provocative drills in decades in response to Pelosi’s visit, including missile tests and live-fire exercises. The No. 3 American official vowed Wednesday during a meeting with President Tsai Ing-wen in Taipei that the US wouldn’t abandon Taiwan.
The Taiwanese Defense Ministry said earlier it continues to be on high alert in response to the exercises, which the agency criticized as an attempt to undermine regional stability. Taiwanese Transportation Minister Wang Kwo-tsai said flights could use alternative air routes via Japan and the Philippines until the drills ended Sunday, while ships would be able to avoid the six exclusion zones.
“Shipping is different from air traffic as there is no fixed route — it’s freer,” Wang told reporters at a briefing late Wednesday. “So what’s done in the past is to avoid the areas where drills will take place.”
Chinese President Xi Jinping is under pressure to give a strong response to the trip.