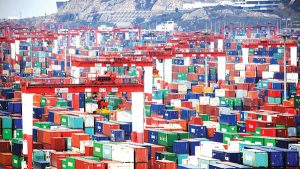 Investors wanting to gauge the health of global consumer sentiment should look no further than China’s factories right now.
Makers of Christmas decorations to clothing and tents say orders from overseas customers are drying up, with some predicting the best they can aim for is flat demand versus last year, according to more than a dozen export managers interviewed by Bloomberg News.
The snapshots from factories in key Chinese hubs indicate households worldwide, already tightening their belts to contend with a rapid rise in the cost
of living, may be cautious
for longer and adds weight to warnings about a potential global recession.
“Consumers don’t have the money to spend with soaring inflation” and the decline in demand has happened suddenly, said Wendy Ma, marketing manager at a textile maker in the eastern city of Ningbo.
Orders for items including buttons, zippers and sewing thread dropped about 30% in July and August from a year earlier as demand from major markets like the US and Europe declined, she said.
The reports from manufacturers suggest the resilience being seen in China’s export data may fade. That said, the boom has been somewhat helped by price inflation as well as Chinese manufacturers making up for delays from pandemic lockdowns and orders that were brought forward in light of ongoing supply chain distortions.
“The general direction is export growth will slow down in the coming months, and it’s possible to reach a negative territory by the end of the year,” said Larry Hu, head of China economics at Macquarie Group Ltd. Still, the decline in demand for China-made goods will be gradual, instead of a collapse, he said.
The fading strength in exports could add another blow
to a Chinese economy that’s
already showing a slowdown in some aspects. China’s central bank unexpectedly cut its key interest rates to ramp up support, as official data showed retail, investment and industrial production numbers for July all missed economists’ estimates.
Headwinds have been slowly building for months. Clark Feng, whose Vita Leisure Co buys tents and furniture from domestic manufacturers to sell overseas, said export orders have been dropping since March and European clients are only asking to buy about 30% to 50% of what they wanted last year.
Workers in some of the factories he sources from have been laid off or sent on vacation, something he hasn’t seen in his decade in the industry.
Overseas clients are looking to clear their existing inventories instead of ordering new products, Feng said. “Our products were very popular last year, and now we swing from one extreme to another extreme and the demand is even lower than pre-pandemic. There’s a sense of panicking.”
Retailers such as Walmart Inc and Target Corp are slashing the prices of merchandise such as apparel and home goods, even as they charge more in other categories amid soaring US inflation.