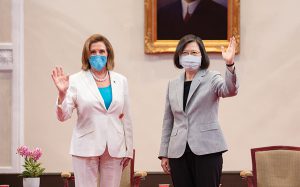 China announced sanctions on US House Speaker Nancy Pelosi over her landmark trip to Taiwan this week, making her the highest-ranking US official designated for penalties by Beijing.
The Chinese Foreign Ministry announced the unspecified sanctions against Pelosi and her immediate family after the speaker departed from Japan late Friday. Earlier, Foreign Ministry spokeswoman Hua Chunying told a regular news briefing that tensions over Taiwan this week had been “entirely caused by Speaker Pelosi and US politicians.”
China didn’t specify what the sanctions entailed, but previous measures have restricted individuals from entering China, Hong Kong or Macau, or doing business there. Such curbs are likely to be largely symbolic for Pelosi.
Washington has so far resisted sanctioning Pelosi’s Chinese counterpart legislative leader and No. 3 official, Li Zhanshu, over his central role imposing the national security law on Hong Kong in 2020. Wang Chen, vice chairman of the legislature and a member of the 25-member Politburo, is the highest-ranking Chinese official to face US penalties.
Last year, Beijing sanctioned former US Secretary of State Michael Pompeo, just as President Joe Biden and his administration took power. Pompeo only visited Taiwan after leaving government and being sanctioned by China.
In 1979, the US formally recognized the government in Beijing and cut ties with Taiwan, which Beijing claims as its territory, as part of a “one China” compromise. Beijing views Pelosi’s visit as the latest in a series of steps to “hollow out” that agreement.
China said earlier this week that Pelosi’s position as second in line of presidential succession made her travel highly sensitive. Beijing has responded to her trip with unprecedented military drills around Taiwan, including firing missiles in the sea and crossing the median line that divides the Taiwan Strait.
Secretary of State Antony Blinken said China had chosen to “overreact” to Pelosi’s trip, and use it as a pretext to engage in provocative military activity.
China missiles deal fresh
blow to ties with Japan
Meanwhile, Japan’s accusation that China fired ballistic missiles into its exclusive economic zone close to Taiwan has heightened tensions between the neighbors, which often spar over human rights and historical grievances.
The show of force was part of Beijing’s biggest cross-strait exercises in decades, and brought a renewed focus to concerns that any military action against Taiwan would have serious ramifications for Japan. That could fuel arguments in Tokyo for a swift increase in defense spending and looser constitutional restrictions on the military.
Beijing’s response to Nancy Pelosi’s visit to Taiwan deals a blow to the delicate balance Japan has sought to maintain between bolstering its security ties with its US ally and other Western countries, and attempting to avoid completely alienating China — its biggest trading partner. It comes as Tokyo is working on a revision of the government’s national security strategy and hammering out plans for a promised “substantial” increase in defense spending.
“If China continues with its military drill schedule as announced and if there are more incidents like this, it will definitely backfire on Beijing,” said Yuki Tatsumi, senior fellow at the Stimson Center in Washington.
The incident will increase awareness of the potential effects of a contingency in Taiwan, she said.