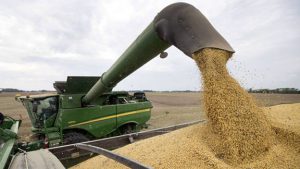 Canada, one of the world’s top barley exporters, is importing a rare cargo from Europe after drought decimated its harvest last year.
France’s Rouen port is set to load its first-ever barley cargo for Canada, on the bulk carrier Federal Spey, according to a spokesman for the port operator. The North American nation hasn’t imported significant volumes from the European Union since the 2015-16 season, trade data show.
Canada only imports from Europe when its supplies are tight and farmers have harvested a poor quality crop, according to Jerry Klassen, market analyst and commodity trader at Resilient Capital in Winnipeg, Manitoba.
The northern nation will only have “bare bone” stocks left by spring, Klassen said, adding that European malt barley is cheaper and better quality than the limited the supplies available in the Prairies.
Canada is typically largely self-sufficient in barley and ranked as the fifth-biggest exporter in the 2020-21 season, US Department of Agriculture data show. But its output shrank by a third last year to the smallest since the 1960s as heat and dryness plagued its prairies. The drought has also shifted trade flows for other grains such as corn as Canada needs to import more to make up for the shortfall of feed.
For barley, the poor harvest has added to a global supply crunch for the grain used in brewing and animal feed, with stockpiles set to reach an almost four-decade low, according to the USDA. Some manufacturers have also faced rising aluminum costs and labour and transport bottlenecks, spurring price hikes for the beverage.