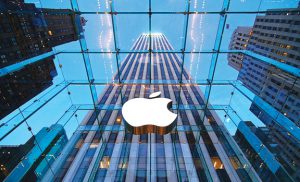 Apple Inc is planning to start using its own custom displays in mobile devices as early as 2024, an effort to reduce its reliance on technology partners like Samsung and LG and bring more components in-house.
The company aims to begin by swapping out the display in the highest-end Apple Watches by the end of next year, according to people with knowledge of the matter. The screens upgrade the current OLED — organic light-emitting diode — standard to a technology called microLED, and Apple plans to eventually bring the displays to other
devices, including the iPhone.
The changes are part of a sweeping effort to replace Apple supplies with homegrown parts, an undertaking that will give the company more control over the design and capabilities of its products. The tech giant has dropped Intel Corp. chips in its Mac computers in favour of in-house designs and plans to do the same with the key wireless components in its iPhones.
Samsung is the world’s most advanced manufacturer of displays, and has been producing its own version of microLED for TVs. But by bringing the screens in-house, Apple could, in the long run, better customise its devices and maintain a stronger hold on its supply chain.
Apple’s screen switch has been underway for years. Bloomberg first reported in 2018 on the company’s plan to design its own displays, starting with the Apple Watch. The move will deal a blow to Samsung Display Co. and LG Display Co., the two main suppliers of the watch’s screens.
Apple’s project is being led by Wei Chen, who runs Apple’s display technology group within Johny Srouji’s Hardware Technologies division. The company has begun testing the microLED displays on an update to the
Apple Watch Ultra, its new
high-end sports watch.
Compared with current Apple Watches, the next-generation displays are designed to offer brighter, more vibrant colors and the ability to be better seen at an angle. The displays make content appear like it’s painted on top of the glass, according to people who have seen them.
The microLED displays will be Apple’s first screens designed and developed entirely in-house. The company currently sources screens from a range of manufacturers, including Japan Display Inc., Sharp Corp. and BOE Technology Group Co., in addition to Samsung and LG.
Apple accounts for 36% of LG Display’s revenue, according to data compiled by Bloomberg. Samsung, which competes with Apple in the smartphone market in addition to serving as a supplier, gets about 6.6% of its sales from the iPhone maker.
The work, codenamed T159, ramped up around 2018 and Apple had set a goal to begin switching to microLED screens as early as 2020. But the project languished due to high costs and technical challenges, people involved in the work said. Apple initially aimed to include the technology in large displays, but those concerns led it to focus instead on its watch — whose screens measure about 2 inches — as its first mobile device with the capabilities.
Apple’s 2024 target could potentially slip until 2025, some people involved in the project said. The company also could just offer a limited supply of the new devices to get the transition started.
Though Apple has designed the new displays and devised their manufacturing process, it will likely rely on an outside supplier to handle mass production. The company operates a 62,000-square-foot facility in Santa Clara, California — about 15 minutes away from its Apple Park headquarters — where it conducts test manufacturing of the screens. It has a similar research and development campus in Taiwan.
Apple has devoted several billion dollars so far to the effort, which is considered internally to be one of the company’s most critical projects — alongside its attempts to develop an electric car, a mixed-reality headset and key health features for its watches. The company spent about $26 billion on research and development in fiscal 2022.
In the near term, the new displays are the most significant changes coming to the Apple Watch. The company plans to introduce new models at the end of this year, but they will be modest updates focused on faster chips and minor health sensor upgrades.
Apple hasn’t updated the main processor inside of its watch for three years.
The company has also customised the displays for its upcoming headset, which will use similar technology to the microLED screens coming to the Apple Watch. While it will take years before Apple moves the iPhone to microLED, it plans to bring OLED technology to the iPad with the Pro model in 2024.
The shift to microLED has been a long time coming for Apple. The effort began in 2014 when Apple bought startup LuxVue, which pioneered microLED technology. The development of Apple’s own screens had been led by veteran executive Lynn Youngs within Apple’s hardware engineering division, but the work was shifted two years ago to the purview of Srouji, who oversees the company’s custom chip group. 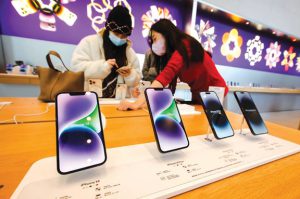 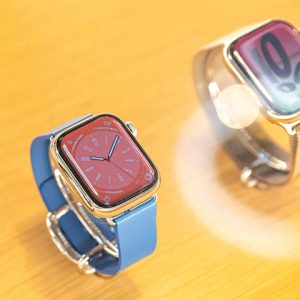 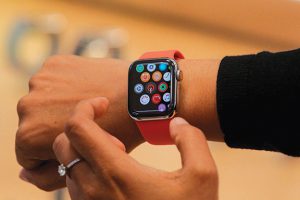