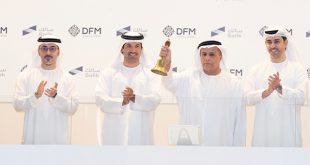 Sultan bin Saeed Al Mansouri, Minister of Economy, discussed economic and trade cooperation with Egypt and Czech Republic, and ways to strengthen the bilateral relationship for greater mutual benefit.
This came during Al Mansouri’s separate meetings with Wael Jad, Ambassador of the Arab Republic of Egypt and Alexander Sporish, the Ambassador of the Czech Republic to the UAE.
During his meeting with the Egyptian Ambassador, the two sides discussed hosting a UAE-Egypt business meeting to identify opportunities for growth as well as pin-point challenges that need to be overcome for ensuring the development of these synergies. The UAE and Egypt also explored potential partnerships in sectors including aviation, tourism and logistics.
Highlighting the keenness of the two countries in developing bilateral economic and trade relations, Al-Mansouri said: “Egypt offers many promising investment opportunities that could fast-track its economic development process in the short to mid-term phase. Massive development projects like the New Suez Canal and its logistics zone, the recent discoveries of huge gas fields in the country and a significant skilled labor market qualifies Egypt to become a major investment destination in the region.”
The Minister pointed out that in light of steps taken by the Egyptian government to tackle challenges facing investors, new and enabling procedures are likely to further shore up Egypt’s prospects globally and make it a more attractive destination with well-defined investment sectors.
Pointing out that the future offers unique prospects to further enhance bilateral relations, Wael Jad reaffirmed Egypt’s commitment to strengthening economic and trade ties with the UAE and in driving partnerships among organizations and entities in the two countries.

Al Mansouri meets Alexander Sporish
The Minister of Economy also met Alexander Sporish, the Ambassador of the Czech Republic to the UAE. The meeting highlighted the outcomes of recent official visits between the two countries and explored enhanced cooperation across sectors.
The two sides gained updates on the status of the economic and technical cooperation agreement that is set for ratification by the UAE and the Czech Republic. The agreement includes frameworks for partnerships in a number of mutually beneficial economic sectors.
Al Mansouri pointed out that the UAE’s keenness to further develop economic and trade cooperation with the Czech Republic resonates with that articulated by the European nation. He noted that the Czech Republic is today a promising destination for investments due to its supporting and enabling environment.
For his part, Alexander Sporish said the UAE has established itself as a major destination for investment and tourism in the region. He noted that 50,000 Czechs visit the UAE annually while some 2,000 live and work in the country. Increasing the number of direct flights between the UAE and the Czech Republic has had the desired positive impact of accelerating cooperation in trade and tourism, he added.
In addition to existing cooperation in agriculture and industry, the Czech ambassador pointed out that his country has vast expertise in several sectors that can build cooperation with the UAE, such as education, scientific research, healthcare, tourism and emergency services.

The Ministry of Economy has organised a Safety and Security Conference at InterContinental Hotel Dubai Festival City with the participation of delegations from Qatar and the Sultanate of Oman and representatives of the car dealerships’ committee in the United Arab Emirates.
Dr. Hashim Al Nuaimi, Director of the Consumer Protection Department in the Ministry of Economy, opened the conference by delivering a speech, in which he reviewed the efforts of the ministry and its outstanding role in spreading consumer awareness and promoting efforts to brief consumers on their rights and duties in collaboration with various competent authorities within the State, in accordance with the provisions of Article 4 of the Federal Law No. 24 of 2006 regarding consumer protection.
Dr. Al-Nuaimi pointed out that the conference represents an excellent platform to address many topics of positive returns for consumers, to raise their awareness about proper handling of cars, and how to claim their rights in this sector, which he described as one of the most important in the country.
He said that the ministry has organised four conferences and educational seminars for consumers on numerous topics affecting the automotive sector such as issues related to spare parts and after-sales service, as well as security and safety in cars.
Dr. Al-Nuaimi stressed that co-ordination for holding this conference was in line with the importance of the automotive sector and the system of security and safety on the roads, which serves the Ministry of Interior’s efforts to reduce the number of deaths caused by car accidents.
He extended his thanks to participants from the State of Qatar and the Sultanate of Oman, Roads and Transport Authority (RTA), and the Interior Ministry and the Committee of Cars, for their co-operation in making the conference a
success.