Tokyo stocks up by break on weaker yen 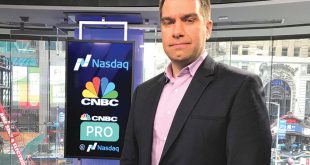 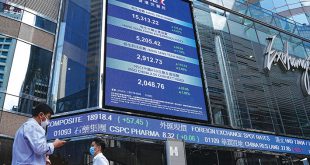 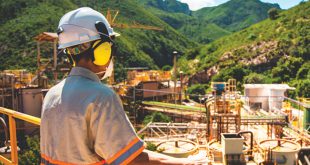 Tokyo stocks shrugged off early losses on Monday morning as a weakening yen gave a lift to exporters and oil prices rebounded, after the market’s biggest weekly rise in six years.
The benchmark Nikkei 225 index fell at the opening bell, tracking a dip on US and European markets Friday, as uncertainty hung over world oil output.
But crude rebounded in Asia on news that major producers Saudi Arabia and Russia plan to cap production, while sentiment was also lifted by the removal by China of the securities regulator who oversaw last year’s market rout.
The Nikkei cast off its morning losses, adding 0.58 percent, or 92.94 points, to 16,060.11 by the break, after the yen weakened against the dollar, which is a plus for shares of Japanese exporters.
The broader Topix index of all first-section shares was up 0.24 percent, or 3.11 points, to 1,294.93.
Last week, the Topix tacked on 7.99 percent, its biggest weekly gain since 2009, according to Bloomberg News.
On currency markets Monday, the dollar rose to 112.88 yen from 112.62 yen on Friday in New York.This week, Japanese inflation and revised US GDP data will be among the key trading cues for Tokyo investors.
Economists widely expect no significant improvement in Japan’s inflation rate from December, which was logged at a meagre 0.1 percent, as policymakers struggle to convince cautious firms to grant big wage hikes to boost consumption.
Traders will be keeping tabs on the latest US data, including new home sales and consumer confidence, as well as the second estimate of gross domestic product for the last quarter of 2015.
The health of the US economy is a key concern for jittery investors, and will dictate future Federal Reserve policy moves.
Markets are also awaiting the outcome of a meeting of Group of 20 finance ministers and central bank governors set to start Friday in Shanghai.
“The prospect of any meaningful commitment to fresh fiscal support by G20 nations to shore up global growth looks … slim,” National Australia Bank said in a commentary.
“Risk is high that central bankers return to home shores and proceed on their … policy ways.” Factory robotics giant Fanuc’s shares rose 1.98 percent to 17,030 yen, Uniqlo operator Fast Retailing was up 1.59 percent to 32,000 yen, and Nintendo jumped 2.65 percent to 16,455 yen.
Bank shares, however, turned lower with Mitsubishi UFJ falling 2.10 percent to 476 yen and rival Sumitomo Mitsui Financial Group down 2.29 percent to 3,3031 yen.