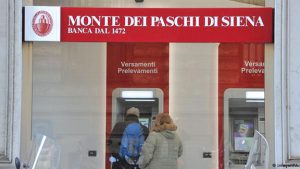 Banca Monte dei Paschi di Siena SpA plans to raise 2.5 billion euros ($2.8 billion) to cover capital needs after the Italian government’s efforts to sell the lender to UniCredit SpA failed.
The capital increase is part of a five-year business plan that will be submitted to European authorities for approval, it said in a statement. The fresh funds will enable the bank to to cover a gap that emerged in stress tests, investments for 800 million euros and restructuring charges of 1 billion euros.
Monte Paschi is revising a plan submitted to regulators earlier this year as the Italian government is failing to comply with a European Union requirement that it exits its stake. Italy bailed out Paschi, the world’s oldest bank, in 2017 and under the conditions of the rescue is supposed to exit the lender by the end of the year, though
officials have indicated they’re asking for an extension.
Finance minister Daniele Franco has said that Italy has already held initial talks with the EU to extend the deadline. Italy now expects to need at least another year to find a new buyer, people with knowledge of the matter have said.
The measures are part of a 2022-2026 strategic plan, which also envisages job cuts managed through a voluntary exit scheme. The proposal will be the starting point for talks with the European Commission, which oversees the application of rules around government aid to companies.
Monte Paschi has been a financial burden for the Italian government since it was first bailed out in 2009, undermined by souring loans and derivatives deals that backfired. It has struggled to deliver consistent profit, given limited room for maneuver under terms the EU set in exchange for backing the aid plan.
Talks on selling Monte Paschi to UniCredit came to a halt earlier this year over the question of how much capital Italy should inject into the lender.