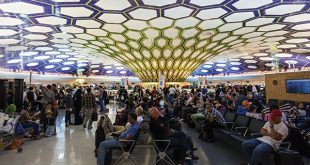 Indian Prime Minister Narendra Modi renewed his call on Saturday for firms to invest in India and turn it into a global manufacturing hub, painting the country as a bright spot for investment in an uncertain world economy.
The right-wing prime minister was addressing a gathering of industry leaders, CEOs and foreign dignitaries in the commercial capital Mumbai to mark the start of Make in India week, which runs until February 18.
The glitzy showcase is part of a drive to convince foreign firms to take advantage of cheap Indian labour and invest in factories in the country as rising wages make traditional hubs more expensive.
“This campaign has the capacity to boost India’s economy and also brighten the global scenario,” Modisaid. “This century is Asia’s century. My advice to you is to make India your centre if you want this century to be your century,” he said. The Hindu nationalist leader faces a huge challenge in persuading foreign companies — many of which still eye India’s labyrinthine bureaucracy, complex regulations and poor infrastructure with suspicion — to invest in the country.
He is seeking to attract foreign direct investment (FDI) into 25 key sectors, from traditional industries such as leather goods to high-skill areas such as defence manufacturing. In the speech Saturday, he said FDI had increased 48 percent since his government took power in May 2014, with December recording the highest monthly inflows ever.
Earlier in the day Modi met with foreign leaders including Swedish Prime Minister Stefan Lofven and Finland’s Prime Minister Juha Sipila and officials from Germany, Japan and Poland.
The chief minister of Maharashtra, Devendra Fadnavis, said in a speech he sought to turn Mumbai into an international financial services centre, describing his state as a national powerhouse of FDI.
Indian officials often lament their country missing the boat on manufacturing, while China’s drive to skill its vast, low-wage workforce to make goods for the West powered its economic boom.
India’s gross domestic product grew 7.3% in the Q3z, year-on year, according to statistics ministry data published Monday, retaining its place as the fastest-growing major economy in the world.