Breaking News
Home » Banking » How low can they go? A guide to ECB’s rates meeting

How low can they go? A guide to ECB’s rates meeting 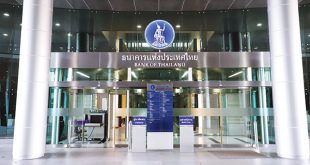 Bank of Thailand hikes rates by a quarter-point

European Central Bank head Mario Draghi has all but promised more monetary stimulus for the 19-country eurozone economy at Thursday’s meeting of the bank’s governing council.
Now the question is, exactly how much will he deliver — and how much effect will it have?
Expectations at a minimum are that the ECB’s governing council will cut the deposit rate for funds from commercial banks even farther below zero, a step aimed at pushing banks to lend.
And the ECB, the top monetary authority for the countries that share the euro currency, could also increase its bond-buying program, which pumps newly printed money into the economy.
The reason for more stimulus would be to boost dangerously low inflation. Since the council’s last meeting, inflation has sunk even farther below the bank’s target of just under 2 percent, to an annual rate of minus 0.2 percent. A reading that low is a sign of economic weakness and some experts fear it could become ingrained, weighing on growth in the longer-term.
Much depends on whether the ECB’s efforts work. If Europe’s modest recovery falters, it would add to the drag on the global economy from slowing growth in China.
Yet economists say central banks around the world may be reaching the limits of what they can do.
Here are five themes to watch from the meeting and Draghi’s news conference.

MONEY MACHINE
Analysts think the ECB will ramp up its bond purchases from 60 billion euros per month, or extend them, or both. Under the program, the ECB creates money and uses those new euros to purchase government and some private-sector bonds frombanks. That pushes more euros into the banking system in the hope they will be loaned to businesses and consumers. In theory, that should eventually raise inflation and economic activity.
The bank could also extend the program, slated to run at least through March 2017.

FORECASTS
The key pretext for any ECB action will be new inflation forecasts. That’s because the ECB’s main mission in life is price stability, a mandate enshrined in the basic European Union treaty.
At the meeting, the bank’s policymakers will get the first forecasts for 2018.
If the estimate remains far below the goal of just under two percent, the argument for more stimulus would be crystal clear.

STIMULUS SCEPTICS
Draghi’s remarks will be scrutinized for signs of dissent on the 25-member council. Jens Weidmann, the head of the German national central bank and a governing council member, has been a leading voice warning that excessive central bankstimulus risks taking the pressure off national governments to do their part to make the eurozone economy work better. Governments are asked, among other things, to reduce bureaucracy and regulation to make it easier to start and grow businesses.

DOWN, EURO
Markets will watch what Draghi says about the euro’s exchange rate. Although thebank insists it does not use monetary policy to influence the exchange rate, a weaker euro is one of the chief benefits of the move to negative deposit rates as it helps exports.
The euro’s average exchange rate against key trading partners’ currencies has fallen in recent days but remains above its level at the bank’s December 3 meeting.