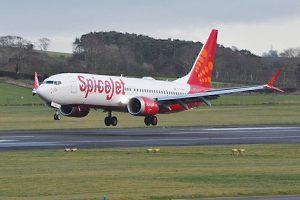 Indian regulators are investigating a Boeing Co 737 Max incident, operated by SpiceJet Ltd, which caused the plane to turn back to Mumbai shortly after departing for Kolkata and its pilots to shut down an engine due to a technical issue.
While the plane landed safely and nobody was injured, the incident is sensitive as it involved an aircraft model that only recently returned to the skies in India after a lengthy global grounding in the wake of two fatal crashes that were primarily blamed on faulty
software.
India can’t “prejudge” whether the incident merits any action on the fleet, and has asked Boeing and enginemaker CFM International for more information, Arun Kumar, director general of India’s aviation regulator, said in a text message.
The crew shut down the engine after an “oil filter bypass light got illuminated in cruise,” he said. Modern commercial aircraft are equipped to operate on a single engine.
SpiceJet said Flight 467 returned to Mumbai safely after experiencing a technical issue. It didn’t elaborate.