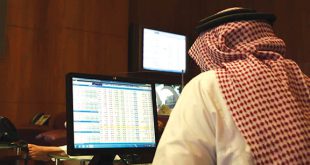 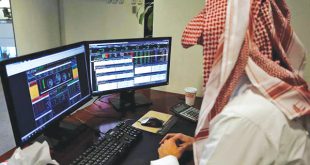 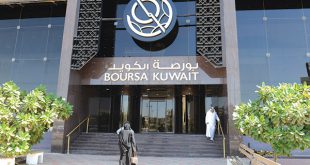 Strong telecommunications shares helped Saudi Arabia’s stock market rebound on Tuesday after steep losses due to the kingdom’s austerity policies, while most other Gulf markets moved little.
The Saudi stock index, which had dropped 3.7 percent in the previous two days, climbed 2.0 percent, although trading volume fell, suggesting many investors were not eager to buy into the rally.
The main boost came from unusually heavy trade in the telecommunications sector, after the government said at the weekend that it would provide operators with “unified licences” allowing them to offer full range of services.
It did not give details, but analysts think this will open the industry to more competition, potentially reducing the dominance of market leader Saudi Telecom.
Zain Saudi Arabia surged to its 10 percent daily limit, Etihad Etisalat (Mobily) climbed 5.4 percent and Atheeb Telecommunication was up 6.9 percent, as all three stocks resumed trading after being suspended for two days. The regulator had asked them to make statements on the expected impact on the new telecoms licensing regime.
Saudi Telecom, which had tumbled 4.9 percent on Monday, rebounded 1.9 percent.
Some other stocks beaten down by worries about the weakening domestic economy in recent days saw cautious buying-back, with Al Rajhi Bank up 4.0 percent after falling 1.5 percent on Monday.
The petrochemical sector, which is exposed mainly to foreign rather than domestic demand and outperformed earlier this week, was mostly sluggish.
But Advanced Petrochemical climbed 1.8 percent to 38.80 riyals after estimating third-quarter net profit shrank 20 percent, a slower rate of decline than in the second quarter, and announcing a 0.65 riyal quarterly dividend. NCB Capital stayed overweight on the stock with a target of 45.10 riyals, citing its operating efficiency and dividend yield.
Elsewhere in the Gulf, Dubai’s index edged down 0.1 percent to 3,406 points. It turned technically bearish on Monday when it closed 1.9 percent down at 3,408 points, breaking technical support on the August and September lows of 3,430-3,442 points, which became immediate resistance.
Abu Dhabi’s index rose 0.3 percent as Dana Gas , the most heavily traded stock, surged 3.7 percent. Qatar gained 0.8 percent in a broad rally, with nine of the 10 most heavily traded stocks rising and Industries Qatar adding 1.1 percent.
The Egyptian stock index, which had climbed 3.2 percent on Monday on hopes that an international financing package would be finalised soon after this week’s annual meetings of the International Monetary Fund and World Bank, rose a further 0.8 percent.
Investment bank EFG Hermes continued to lead the market up, gaining 3.6 percent.