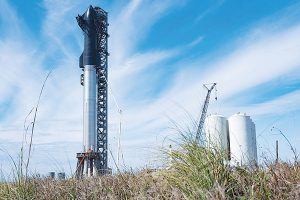 SpaceX filled its Starship rocket and massive booster with extremely cold propellant for the first time stacked together, a crucial test of its new deep-space launch system ahead of its first orbital launch attempt.
The procedure, conducted at the company’s Starbase facility in Boca Chica, Texas, is known as a wet dress rehearsal and is meant to run through all the major steps that engineers will need to perform on launch day — everything but launch itself.
Starship is SpaceX’s next-generation launch vehicle, designed to take cargo and people to deep space destinations like the moon and Mars. Nasa has contracted SpaceX to develop Starship into a lander that can take the agency’s astronauts to and from the lunar surface.
SpaceX claims that more than 10 million pounds (4.5 million kilograms) of propellant was loaded into the Starship system during the test. The procedure will “help verify a full launch countdown sequence, as well as the performance of Starship and the orbital pad for flight-like operations,” according to SpaceX.
Completion of the test potentially paves the way for the next big milestone in Starship’s development: Firing up all 33 Raptor engines affixed to the bottom of the booster, called the Super Heavy, in what’s known as a static fire. When that happens, it’ll mark the first time that all of the Super Heavy’s engines will have fired at the same time. All 33 will need to fire in sync during the first orbital launch.
Once the static fire is complete, SpaceX will be closer to finally launching its Starship rocket to orbit, though it’s possible that the company may opt to conduct more tests ahead of a launch attempt. SpaceX will also need to obtain a launch license from the Federal Aviation Administration to conduct the launch from the Boca Chica facility.
SpaceX CEO Elon Musk has previously given many target launch dates for Starship. His most recent prediction was that a launch could occur in February or March.