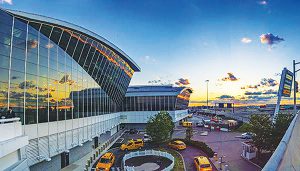 New York Governor Kathy Hochul announced a $9.5 billion revamp of Terminal 1 at John F Kennedy International Airport, restarting the transformation of one of the busiest airports in the US as it works through pandemic delays.
The funding infusion will create a new Terminal 1 on the current site of terminals 1, 2, and 3 at the airport, which handles nearly 62 million passengers a year. The terminal will be 2.4 million square feet and have 23 new international gates, Hochul said.
Construction will begin next year and the first new gates will open in 2026, according to Rick Cotton, executive director of the Port Authority of New York & New Jersey. He said the project will create 10,000 jobs.
Financing is coming through a public-private partnership with investors including Carlyle Group, JLC Infrastructure and Ullico, which will cover the full cost of the terminal. The Port Authority will build supporting road and utility
infrastructure.
The Port Authority board will vote on a financial agreement with the project’s financial partners, Cotton said. It will also vote on the authorisation of the full $2.9 billion of funds included in the Port Authority’s 2017-2026 capital plan for JFK redevelopment.
The new Terminal 1 is part of a massive refurbishment project started in 2017, when then-Governor Andrew Cuomo promised to transform the airport from one marked by delays and disarray into “one of the finest airports in the world.”
At the time, a committee convened to come up with a plan to overhaul the airport said “JFK falls far short of today’s global standards.”
Since then, the Port Authority has embarked on a $13 billion redevelopment plan, which includes renovations and upgrades of four terminals. The pandemic led to a two-year delay in some of those projects due to an “enormous drop in air traffic and a need to restructure these deals,” Cotton said.
For instance, the Terminal 1 project was initially scheduled to break ground in 2020. Due to the impact of Covid on travel, the terms of the agreement had to be restructured to extend the lease term to 2060 “to provide sufficient time after the terminal opens to enable the private investors recover their multi-billion-dollar investments,” according to a release from Hochul’s office.
Hochul said the Terminal 1 announcement sends a statement that her administration will continue to push the
JFK airport redevelopment
forward.