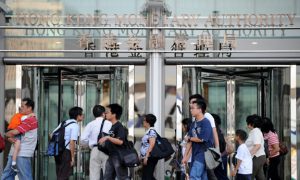 Hong Kong’s de facto central bank bought the local dollar at the fastest pace on record this month to defend its currency from crossing the weak end of its trading band.
The Hong Kong Monetary Authority (HKMA) bought HK$78.1 billion ($10 billion) so far this month, including its HK$20.8 billion purchase. The currency still continues to linger near the weak end of its 7.75-to-7.85 per greenback trading band.
The downward pressure on the Hong Kong dollar reflects outflows due to a widening interest-rate gap with the US rather than speculative attacks on the currency peg. The city’s aggregate balance — a gauge of interbank liquidity — remains high, making it relatively cheap for traders to short the currency against the higher-yielding greenback.
While, the three-month Hong Kong interbank offered rate, or Hibor, rose to a two-year high this week, it’s still more than 60 basis points below the US equivalent. That indicates the HKMA will have to drain cash levels further to cap outflows.
“Dollar rates are set to rise further upon expected aggressive Federal Reserve rate hikes,” said Frances Cheung, rates strategist at Oversea-Chinese Banking Corp. in Hong Kong. This is likely to keep the downward pressure on the Hong Kong dollar and interventions are likely to continue, she said.
The city’s aggregate balance will fall to HK$241.9 billion on June 23. HKMA withdrew HK$25.6 billion of local dollars last week, which was the largest for a single day as per Bloomberg data going back to 2003.
“Hong Kong interbank offered rate may start to see more pronounced upward pressures when the aggregate balance falls below around HK$130 billion,” Goldman Sachs group Inc strategists including Danny Suwanapruti wrote in a note.
The Hong Kong Monetary Authority Chief Executive Eddie Yue had said earlier this week that the HKMA may accelerate purchases of the local currency until the city’s interest rates approach the US level, Sing Tao Daily reported.
The Hong Kong dollar was little changed at 7.8500 per greenback as of 4:22 pm local time. Risk-reversals show a premium to hedge dollar-Hong Kong dollar’s downside, signaling muted market concern over the possibility of the currency pair rising above 7.85.
Hong Kong’s currency was pegged to the greenback in 1983. The current trading band of 7.75-7.85 per greenback was set in 2005 and has never been broken. When it gets too close to one end or the other, the HKMA intervenes, either by buying or selling the city’s dollars.