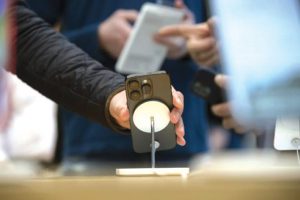 That move makes Pegatron the second Apple supplier to produce the iPhone 14 in the country.

It comes at a time when Apple’s key iPhone Pro manufacturing hub in the Chinese city of Zhengzhou — operated by Foxconn Technology Group — was placed under an abrupt Covid-19 lockdown by authorities. That situation put a spotlight on Apple’s deep reliance on China, though the India expansion was in line with diversification plans already in place.

Foxconn began making the iPhone 14 in India in September, mere weeks after its global unveiling and much closer to parity with the start of production in China, where the vast majority of iPhones are still made. Apple’s chief production partner still has exclusivity on the iPhone Pro models, which it assembles in Zhengzhou.

The Pegatron factory in India’s southern Tamil Nadu state, which employed more than 7,000 as of the end of September, also began making iPhone 12 handsets earlier this year. Pegatron generally gets orders for Apple’s entry-level models.

Cupertino, California-based Apple is seeking alternative production hubs amid a trade war between Washington and Beijing and tight enforcement of Xi Jinping’s Covid Zero policy in China. At the same time, New Delhi is positioning India as a competitor to China’s manufacturing prowess. Local Apple reseller Redington has surged in value since Foxconn’s coronavirus issues emerged over the past week.

One big hurdle for more production shifting out of China is that the majority of iPhone components are still built there and have to be shipped to wherever devices are assembled, Counterpoint senior analyst Ivan Lam said.

All of Apple’s biggest Taiwanese suppliers — Foxconn, Pegatron and Wistron Corp. — have ramped up iPhone assembly in India, boosted by Prime Minister Narendra Modi’s financial incentives program. That has also helped to increase iPhone exports from the South Asian country.

Apple first began assembling iPhones in India in 2017 via Wistron after a yearslong effort to build manufacturing capabilities in the country.

Samsung sells record $1.7b worth of phones in India

Samsung, once the unrivaled leader in India’s fledgling smartphone market, has grappled with stiffening competition from Chinese brands such as Xiaomi, Oppo and Vivo, who sell seven of every 10 devices in country.

India’s smartphone shipments falls 11% in the September quarter, according to tech researcher Counterpoint. But Samsung was the only brand among the top five to clock annual growth, the research firm said.