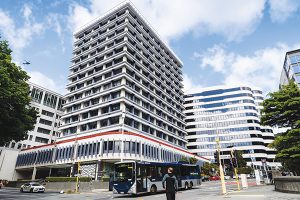 New Zealand’s central bank (RBNZ) raised interest rates by a record 75 basis points and signalled further tightening ahead, stepping up its inflation fight even as it forecasts a recession next year.
Short-maturity bond yields surged after the Reserve Bank’s Monetary Policy Committee lifted the official cash rate to 4.25% from 3.5% on Wednesday in Wellington, as predicted by most economists. Its forecasts show the OCR peaking at 5.5% in the third quarter of 2023, up from a previous peak of 4.1%.
“The RBNZ sees inflation as deeply embedded,” said Michael Gordon, acting New Zealand chief economist at Westpac Banking Corp. “It now believes that a recession will be needed to bring inflation back within the 1-3% target range.”
New Zealand’s policy-sensitive 2-year government bond yield jumped 19 basis points to 4.58% and the 10-year advanced 5 basis points to 4.21%. Swap rates also climbed sharply, while the currency pared its initial gains and traded at 61.71 US in Wellington.
The central bank is responding to stronger-than-expected inflation and near-record low unemployment, which support the case for it to accelerate the pace of tightening after five straight 50-point hikes. By comparison, both Australia and Canada have slowed their rate increases as risks mount of a global recession.
“The Committee agreed that the OCR needs to reach a higher level, and sooner than previously indicated, to ensure inflation returns to within its target range over the medium-term,” the RBNZ said in a statement.
The central bank projected that the economy will contract for four straight quarters starting from the second quarter of next year.

“Core consumer price inflation is too high, employment is beyond its maximum sustainable level, and near-term inflation expectations have risen.”
Today’s hike is the biggest since the RBNZ introduced the OCR in 1999 and takes the benchmark to its highest level since 2008. The policy committee considered raising the rate by as much as 100 basis points today, its record of meeting showed.
The bank projected that the economy will contract for four straight quarters starting from the second quarter of next year.
But it predicted annual inflation will accelerate to 7.5% in the final quarter of this year from 7.2% currently. Consumer-price gains will slow to 5% by the end of 2023 and are not seen returning to the midpoint of the 1-3% target until late 2025.
The RBNZ’s updated forecasts show the OCR gradually declining from late 2024.
“The Committee agreed that to achieve its remit objectives, actual and expected inflation need to decline substantially,” the RBNZ said.
“Members highlighted that the longer actual inflation remains above the target band, the more likely it is that higher inflation expectations become embedded.”
Last month, Canada increased its overnight rate by 50 basis points instead of the 75 basis points many were expecting.
Some Federal Reserve officials are also backing a downshift to half-point increments after a report showed a softening in core consumer goods inflation, while a majority of economists expect the Bank of Korea to revert to 25 basis-point hikes on Thursday after a 50-point increase last month.