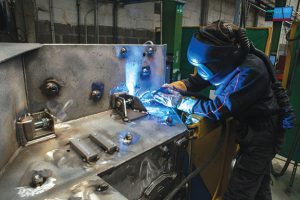 The private-sector economy in the euro area unexpectedly returned to growth at the start of 2023, offering further signs the region may avoid a recession and comforting the European Central Bank’s focus on underlying inflation risks.
S&P Global’s flash Purchasing Managers’ Index rose to 50.2 in January, better than the 49.8 reading predicted in a Bloomberg survey and the first time since June that the gauge was above the 50 threshold that separates expansion from contraction.
A variety of factors including slowing inflation, a warmer-than-usual winter in energy-strapped Europe and an easing of supply-chain constraints are fanning optimism in the 20-member currency zone.
While the steadying of the economy does add to evidence the region might escape a recession, “the region is by no means out of the woods yet,” said Chris Williamson, chief business economist at S&P Global Market Intelligence.
The euro fell back to flat on the day and bunds scaled new session highs after the flash PMI data. Readings for the euro area’s two biggest economies remained below 50, though the German services and French manufacturing sectors saw surprise expansions.
“Demand continues to fall — merely dropping at a reduced rate — and an upturn in the rate of inflation of selling prices for both goods and services will add encouragement to the hawks to push for further monetary policy tightening,” Williamson said.
The European Central Bank has already increased interest rates by 250 basis points and is set for another half-point hike next week. What happens after that is still unclear, with some pushing for a more gradual approach, while more hawkish Governing Council members call for “significant” moves.
“The case for higher interest rates is fueled further by the upturn in employment growth recorded during the month and signs of higher wages driving the latest upturn in price pressures,” Williamson said.