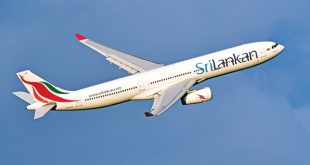 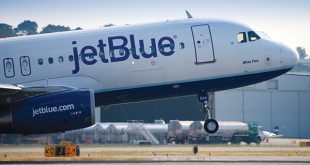 JetBlue aims to cut costs even amid travel rebound 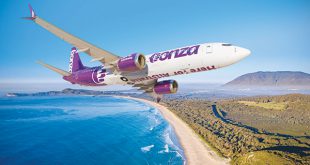 From an initial overture five months ago through a two-day bidding war last week, Alaska Air Group Inc. was determined to acquire Virgin America Inc. as a means toward national expansion – and protection from larger rivals.
The combination boosts Alaska’s West Coast might with greater access to California, while providing more service to flight-constrained East Coast cities such as New York and Washington. The deal also provides extra bulk against four bigger airlines that control more than 80 percent of the domestic market and have waged war against both Alaska and Virgin.
“The industry is becoming more concentrated,” Alaska Chief Executive Officer Brad Tilden said on a conference call Monday. “For Alaska, it says scale is relevant and we think it is a good idea for us to have a larger scale to work from.” Alaska will pay $2.6 billion in cash for Virgin America, or $57 a share, beating out an offer from JetBlue Airways Corp. The winning bid is a 47 percent premium to Virgin America’s closing price on Friday and 86 percent above its value March 22. The transaction is valued at $4 billion including debt and capitalized aircraft leases.
Virgin America surged 42 percent to close at $55.11 in New York, reaching the highest level since its 2014 initial public offering. Alaska fell 3.8 percent to $78.92.

Cross-Country Flights
The takeover will expand Alaska’s route network out of Washington, Oregon and Alaska, adding the important business centers of Los Angeles and San Francisco and rights to operate at New York’s LaGuardia and Kennedy, New Jersey’s Newark Liberty and Washington’s Reagan National airports, where the U.S. limits flights. Cross-country routes between New York and California are among the most lucrative in the domestic industry. Alaska, which hopes to now become the carrier of choice in California, has invested $3 billion in a new fleet of airplanes, pared $1.2 billion in debt and has an investment-grade balance sheet. It’s been profitable on an annual basis since 2009. “We are operating from a position of strength,” Tilden said. “We are confident in our ability to run the airline. We’re getting increasingly confident about the industry itself. The industry structure has changed. We’re optimistic about the long-term case for U.S. airlines.”

Branding Question
The company will retain the Alaska Air name, brand and Seattle headquarters. It will explore with Branson’s company how the Virgin America brand “could continue to serve a role in driving customer acquisition and loyalty,” Alaska said.
The combined carriers may be better positioned to fend off, or at least withstand, challenges from larger rivals. Delta Air Lines Inc. has expanded aggressively in Seattle, establishing a West Coast hub and jumping-off point to Asia. The Atlanta-based carrier wants to almost triple the number of airport gates it holds in Seattle to 30.
Virgin America has faced its own competitive battles, most recently being caught in a Dallas price war involving Southwest Airlines Co., American Airlines Group Inc. and Spirit Airlines Inc. In February, Virgin America CEO David Cush said he would rather fly out of the city with empty seats than sell tickets at rates so deeply discounted that the carrier can’t make money. Similar pricing skirmishes have flared in Chicago involving United Continental Holdings Inc., one of the four biggest airlines, along with Delta, American and Southwest.

‘Growth Opportunities’
“Competitive challenges continue to rise and growth opportunities outside core markets are modest absent the merger,” Daniel McKenzie, an analyst at Buckingham Research Group, said in a note Monday. Virgin America’s outlook as a stand-alone airline would be “challenged,” he said.
Mo Garfinkle, an airline-industry consultant who has advised companies and investors in previous mergers, said the deal is “offensive and defensive,” giving Alaska valuable airport footholds while keeping JetBlue out of its territory.