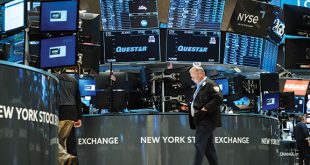 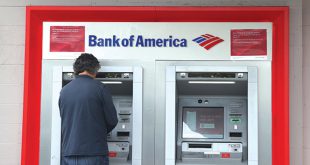 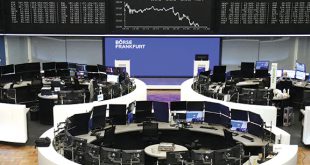 With many markets across the world closed, investors pared back higher-risk holdings, keeping the Japanese yen near its strongest level in 18 months. Gold advanced with sovereign bonds, oil declined and European equities held onto their biggest loss in two months.
Japan led a selloff in Asian equities, with the Topix index sliding for a fifth day as trading resumed after a break on Friday. The yen held its steepest back-to-back gains since the global financial crisis and the Stoxx Europe 600 Index reached a two-week low. Oil retreated, following a 20 percent surge in April, as near-record Iraqi output added to anxiety over a global glut. U.S. Treasuries advanced and Japan’s 20-year bond yield sank to a record. Markets shut for holidays included those of China, Hong Kong and the U.K.
The yen soared almost 5 percent on the final two trading days of last week as the Bank of Japan unexpectedly refrained from boosting stimulus amid fading prospects for a U.S. interest-rate increase this summer. While a weakening dollar helped boost commodities prices in April by the most since 2010, a rebound in worldwide stocks is losing momentum as economic data point to tepid global growth amid lower-than-forecast corporate earnings.
“With the BOJ disappointing, people are buying more yen,” said Jens Peter Sorensen, chief analyst at Danske Bank A/S in Copenhagen. “Nobody is doing very much with the holidays. People are waiting and seeing.”
U.S. consumer spending rose less than economists forecast in March, a report showed Friday, wrapping up the weakest quarter in a year for the biggest part of the nation’s economy. China released an official manufacturing gauge over the weekend that added to evidence its economy is stabilizing, and comparable measures are due Monday for the U.S. and the euro area.
The euro climbed to more than $1.15, reaching its strongest level since August, as manufacturing in the currency bloc expanded at a faster pace than initially estimated in April.
The yen climbed as much as 0.3 percent to 106.14 per dollar, the strongest level since October 2014, before being little changed at 106.54 as of 8:43 a.m. New York time. The Stoxx 600 increased 0.2 percent, with the volume of shares changing hands 46 percent below the 30-day average today.

Currencies
The yen has strengthened 13 percent this year, the best performance among Group-of-10 currencies. The euro advanced 0.3 percent to $1.1489, after being as strong as $1.1501. South Korea’s won gained 0.2 percent, reversing earlier losses.
The U.S. Treasury Department said it has put China, Japan, Germany, South Korea and Taiwan on a new monitoring list to ensure they aren’t manipulating exchange rates to gain an unfair trade advantage. The Bloomberg Dollar Spot Index, which tracks the greenback against 10 major peers, headed for its lowest close in almost a year. It slumped 2 percent last week as the BOJ’s inaction coincided with Fed Chair Janet Yellen reiterating she’s in no rush to cool the U.S. economy by raising borrowing costs.
“So long as the Fed signals that they are being cautious in raising rates, real yields in the U.S. will decline, leading the dollar weaker,” said Hiromichi Shirakawa, the Swiss lender’s chief Japan economist and a former BOJ official. “The currency market is in a rather dangerous zone.”
CommoditiesGold futures climbed as much as 1.1 percent to $1,304.30 an ounce, the highest since January 2015.
Brent oil retreated 0.5 percent, following a 22 percent surge in April, as near-record Iraqi output added barrels to a worldwide supply glut. Gold climbed for a sixth day, the longest streak since March 2015. Brent crude fell to $47.13 a barrel. Iraq’s oil exports rose to 3.36 million barrels a day in April, the Oil Ministry said Sunday, compared with 3.29 million barrels a day in March and the record 3.365 million barrels a day in November. The figures don’t include sales by the Kurdistan Regional Government.
The London Metal Exchange is shut on Monday.