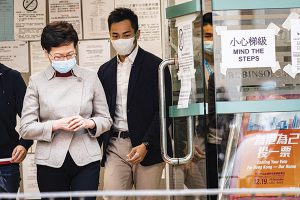 Chinese President Xi Jinping told Hong Kong leader Carrie Lam the city is developing in a good direction, days after an election installed a legislature of Beijing loyalists in the Asian financial hub.
Xi added that he fully recognised the work of her government, as the pair met in Beijing. Lam’s annual trip to brief China’s state leaders on social, political and economic issues in the city comes as speculation mounts over whether she’ll seek a second, five-year term next year.
“Hong Kong has been restored from the chaotic condition and is developing in a good direction,” Xi said. “The central government fully recognises your work.”
Xi last granted an in-person audience with a leader from outside mainland China when he saw Pakistan’s president in Beijing in March 2020. He hasn’t left his country since the early days of pandemic, as China pursues a Covid-zero strategy of trying to eliminate the virus within its borders.
Lam’s visit will be closely watched for signs she has Beijing’s backing to run in the vote for Hong Kong’s next chief executive. No candidates have yet declared their intention to run.
When Lam last met Xi in 2019 he said the central government recognised “the courage and responsibility” she’d demonstrated during anti-government unrest, a rare display of effusive praise from China’s president. Chinese and Hong Kong authorities have yet to announce the highly anticipated start date for cross-border quarantine-free travel amid the global spread of omicron. Lam sat down with Premier Li Keqiang, who praised her government’s handling of Covid-19 and urged greater integration with China.
“Since the beginning of this year, you have led the Hong Kong government to exercise prudent governance, effectively controlling the epidemic and facilitating economic recovery,” Li said.
His comments come after Hong Kong installed a legislature of Communist Party loyalists under a new electoral system revamped by Beijing. That overhaul was prompted by Xi’s announcement during Lam’s annual report to China, conducted via video conference in January, that Hong Kong must be governed by “patriots.”
Group of Seven nations expressed “grave concern” over the Sunday’s election, which drew the city’s lowest ever turnout. China followed it with a white paper on democracy saying the city’s electoral system had improved.