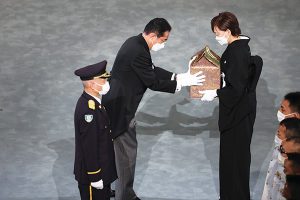 Japanese political leaders remembered former Prime Minister Shinzo Abe at a state funeral as a statesman who steadily led the country during his record run as premier, amid domestic opposition to the event that has undermined support for the current prime minister.
About 4,300 people including US Vice President Kamala Harris, world leaders, dignitaries and members of Abe’s ruling Liberal Democratic Party attended the event Tuesday at the Budokan arena in central Tokyo under tight security. The somber ceremony, watched over by a phalanx of police and a military honor guard, was Japan’s first state funeral for a former prime minister since 1967 and came more than two months after the country’s longest-serving premier was assassinated on the campaign trail by a man with a homemade gun.
Abe, who died at the age of 67, was a defining and sometimes divisive figure as the country navigated economic stagnation and China’s rise during his two terms, from 2006-2007 and 2012-2020. He was a security hawk, a fiscal dove, a defender of Japan’s alliance with the US and an advocate for maintaining the postwar global order.
Abe’s wife Akie carried the cremated remains of the former prime minister into the venue, bowing to the current leader Fumio Kishida as cannons fired off military salutes outside.
“Who could ever have imagined that such a day would come,” Kishida said at the funeral. “Prime Minister Abe, you were a person who we needed to live much longer.”