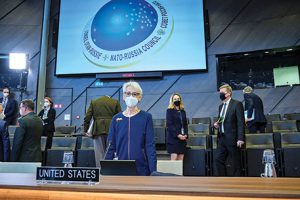 Estonia’s prime minister issued a warning that the European Union and the US must avoid falling into a Russian “trap” in negotiations with the Kremlin, whose aim is to weaken security in the EU.
Russia’s negotiating tactics amount to “blackmail,” said Kaja Kallas, the Estonian premier, using some of the most hawkish language of an EU member state leader. A former Soviet republic, Estonia lies on the EU’s eastern frontier bordering Russia.
“We must not fall for the trap they have set, which is designed to fatally undermine European security as we know it and to coax us into making concessions,” Kallas said in a statement after a phone call with her Polish counterpart, Mateusz Morawiecki, on Monday. “It is, in a word, blackmail.”
Russian and American officials met last week to discuss a military buildup near Ukraine’s border and demands made by President Vladimir Putin that Nato rule out future membership for Ukraine and withdraw forces to positions it held in 1997.
While the US and EU reject giving Russia a veto over Nato membership, US diplomats say they are willing to discuss bilateral issues including the size and scope of future military exercises and the placement of intermediate-range missile systems in Europe. The US withdrew from a treaty regulating such weapons in 2019.

Russia to move forces to Belarus for military drills next month
Meanwhile, Russia said it will move forces to Belarus for military drills next month, amid deepening confrontation with the US and Europe over Ukraine.
The joint exercises, called “Allied Determination-2022,” will take place Feb. 10-20, with Russian troops in place in Belarus by February 9, Deputy Defense Minister Alexander Fomin said at a briefing Tuesday for military attaches in Moscow. They’ll practice search-and-destroy measures against “illegal formations” and defense of the state border against “armed groups of militants,” he said.
Russia and Belarus have formed a so-called Union State to coordinate economic and defense policies. Belarus President Alexander Lukashenko said the joint drills would practice confrontation with the Baltic countries, Poland and Ukraine.
Fomin didn’t say how many Russian forces were being dispatched to join the drills in Belarus, which borders Ukraine. The announcement comes as the US and its European allies seek to deter Russian President Vladimir Putin from a possible invasion of Ukraine, with American intelligence showing Russia has massed some 100,000 troops close to the border.
Russia plans to send 12 advanced Su-35 fighters and two divisions of S-400 anti-aircraft systems to test its air-defenses as part of its defensive union with Belarus, the Tass news service reported, citing Fomin.
Russia denies any current plan to invade Ukraine. At the same time, Putin is demanding binding security guarantees from the US and the North Atlantic Treaty Organization that would ban Ukraine and other ex-Soviet states from joining the alliance, as well as oblige Nato to withdraw forces to positions they held in 1997.
Russia says it’s waiting for written responses from the West to its security proposals, after holding a series of inconclusive meetings with US and European officials last week.