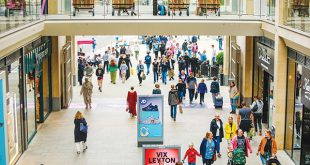 Wal-Mart Stores Inc. is pushing more aggressively onto Alibaba Group Holding Ltd.’s turf.
The Bentonville, Arkansas-based retailer boosted its stake in China’s second-largest e-commerce website JD.com Inc., strengthening an alliance to win more market share in the world’s largest online market. Wal-Mart lifted its holding to 10.8 percent from 5.9 percent, according to an amended 13-G filing on Thursday. JD rose 7.5 percent in extended trading in the U.S.
Wal-Mart is tapping JD.com’s online resources after it struggled to adapt to a slowing local economy and more shoppers turn to online platforms including those owned by Alibaba. Wal-Mart Chief Executive Officer Doug McMillon has said that the company needs to succeed in China, where it estimates that 25 percent of global retail growth will come from in the next five years.
On Tuesday, JD.com’s shares gained the most intraday since Feb. 16, jumping as much as 12 percent. Its shares have dropped 13 percent this year.
“The stepped-up investment in JD has been part of our plan, as we continue to be a passive investor,” Jo Warner, a spokeswoman for Wal-Mart, said in an e-mail.
Following Amazon.com Inc.’s model, a significant share of JD.com business is generated from selling products it holds in its own inventory. Its logistics network has also helped win more users through speedy shipping. The company is competing with Alibaba in sectors of fast consumer goods and electronics and home appliances, as both seek growth in smaller cities and rural areas.