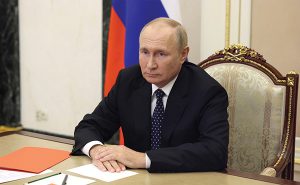 Vladimir Putin’s decision to call up 300,000 men to fight in his invasion of Ukraine is hitting two of the battered Russian economy’s weak spots.
The order takes about one in a hundred of the country’s active workers from their jobs to send to the front when record-low unemployment – combined with the exodus of Russians fleeing the country to avoid the mobilization – means there are few candidates to replace them. And it’s likely to batter Russians’ already-fragile finances, leaving some draftees’ families short of cash.
“Mobilization delivers a strong negative shock to consumer sentiment,” said Renaissance Capital economist Sofya Donets. “We’ll see a strategy of abandoning unnecessary purchases and a deep drop in demand.” She forecasts the drop will add about 0.5% to the contraction in GDP this year.
Bloomberg Economics also expects the call-up to deepen the drop in GDP and boost inflation this year. “Worse, these ramifications are likely to persist over the next five years,” Russia economist Alexander Isakov said.
The country’s economy has held up better under the sweeping sanctions imposed by the US and its allies over Putin’s invasion of Ukraine than many had predicted.