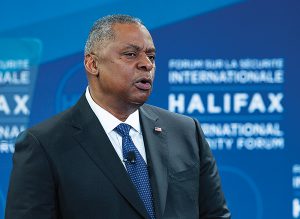 US Secretary of Defense Lloyd Austin urged China to avoid “destabilizing actions” toward Taiwan in his first face-to-face meeting with Defense Minister Wei Fenghe since House Speaker Nancy Pelosi’s visit to Taipei in August.
In talks Tuesday in Siem Reap, Cambodia, the Pentagon chief also called for the two sides to maintain open lines of communication and warned of “increasingly dangerous behavior” by Chinese military aircraft in the Indo-Pacific region, according to a statement and briefing by US officials after the meeting ended.
Chinese officials called the roughly 90-minute meeting positive and said they agreed on the need to strengthen crisis management, but put the blame squarely on the US for deteriorating ties between the world’s two biggest economies.
“The responsibility of the current state of affairs of China-US relations does not lie with China — the main reason is that the US has made the wrong strategic judgment,” Defense Ministry Spokesman Tan Kefei told reporters in Cambodia. He said the US should “adopt a rational and practical China policy so as to really remove the root causes of crisis.”
The meeting was the latest effort to put the US-China relationship on a more stable footing following the first in-person talks between Chinese President Xi Jinping and US President Joe Biden last week in Indonesia. While the two sides haven’t resolved deep differences over Taiwan, human rights, US restrictions on tech exports or other issues, they have sought to restore rudimentary links that would keep accidents or disagreements from spinning out of control.
The US has watched with growing concern as China has built up its military into one of the world’s most powerful fighting forces. Last week, Biden administration officials publicly acknowledged for the first time that China has fielded new, longer-range ballistic missiles on its six nuclear-powered submarines, allowing it to strike the continental US from much closer to its own shores.
Beijing also continues to lay claim to a large swath of the South China Sea, staking out a position contested by nations from Vietnam to the Philippines.
In the Philippines on Tuesday, Vice President Kamala Harris said the US would stand with the Asian nation “in the face of intimidation and coercion in the South China Sea.”
China’s moves have prompted the US to ramp up efforts to improve outreach in the Indo-Pacific, particularly after Beijing appeared to be making inroads in places such as the Solomon Islands. In a speech in May, Secretary of State Antony Blinken said the US “will shape the strategic environment around Beijing” to advance American interests.
China has responded by accusing the US of having a Cold War approach to the world. Asked about Harris’s visit to the Philippines, Foreign Ministry spokesman Zhao Lijian said ties between Washington and Manila shouldn’t “harm any other country’s interests.”
In a more pointed dig at the US last week, Xi said, “The Asia-Pacific is no one’s backyard and should not become an arena for big power contest.”