US, China defense chiefs likely to meet in sign of thawing ties 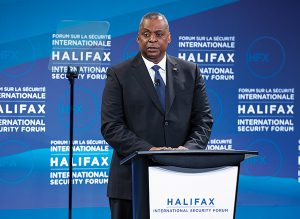 The US and Chinese defense chiefs are likely to meet for their first talks since Beijing suspended dialog with Washington over House Speaker Nancy Pelosi’s August visit to Taiwan —the latest sign that ties between the two nations are stabilizing.
US Defense Secretary Lloyd Austin would welcome a meeting with Chinese Defense Minister Wei Fenghe during a gathering of defense chiefs in Cambodia, Brigadier General Pat Ryder, the Pentagon spokesman, said Monday in Jakarta. That would follow Chinese President Xi Jinping’s recent meetings with President Joe Biden and, separately, Vice President Kamala Harris, who remains in the region.
“Secretary Austin has frequently expressed the importance of keeping lines of communication open between the U.S. and China and welcomes the opportunity to meet with his PRC counterpart in Cambodia,” Ryder said in a statement, adding that there was nothing formal to announce “at this time.”
A flurry of high-level US-China talks has helped ease pessimism about a relationship that plunged to its lowest point in a generation over issues including Taiwan, human rights in Xinjiang and US restrictions on tech exports to China.
While all those issues remain intractable, the lack of communication between the two sides had fueled concerns that new disagreements or an accident could quickly spiral out of control.
Biden officials have repeatedly called for “guardrails” to prevent tensions between the world’s two largest economies from getting out of hand. In his encounter Saturday with Harris in Bangkok, Xi emphasized his view that more communication is needed.
“I hope both sides will step up mutual understanding, reduce misunderstanding and misjudgment, and together push for Sino-US relations to return to a healthy and stable track,” Xi said.
Austin arrives in Cambodia on Monday night for the Asean defense ministers’ gathering after meeting with Indonesia’s defense minister in Jakarta. The Pentagon chief is scheduled to sit down with his counterparts from the Philippines, Vietnam and Cambodia.
Wei and Austin last spoke in June in Singapore, when the bulk of the conversation between the two defense chiefs was on Taiwan. Wei condemned American moves to sell arms to the democratically-run island.
That was just before Pelosi visited Taipei, prompting China to conduct its biggest ever air and sea exercises near the island, including firing a missile that reportedly flew over Taipei.
Biden, who returned to the US Thursday after visiting Egypt and Indonesia, has said several times that US troops would defend Taiwan from an unprovoked attack.
With tensions high, US officials have warned that China has become more aggressive with “dangerous intercepts” against American military aircraft and ships, as well as those of Japan, Canada and Australia in the South China Sea region. China claims a huge swath of the waterway, home of some of the world’s busiest commercial shipping lanes.
While Xi has sought to build stronger ties with Pacific nations such as Papua New Guinea and the Solomon Islands, his government has also charged the US with trying to build a Nato-style bloc of allies in the region. The Chinese leader warned last week that “the Asia-Pacific is no one’s backyard and should not become an arena for big power contest.”
Harris is continuing her travel through Southeast Asia this week, and is scheduled to visit the Philippines province of Palawan, on the edge of the South China Sea after meeting with President Ferdinand Marcos Jr. in Manila. The US-Philippine relationship has been improving quickly under the new president.