US cancels 1,100 flights more due to snow storms, Covid rise 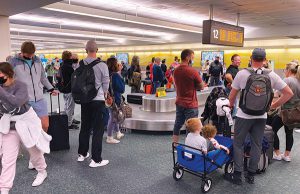 Flight cancellations that disrupted US travel over the Christmas weekend stretched further, with winter storms further pressuring carriers that were already short-staffed because of spreading Covid-19 cases.
About 1,160 US flights were cancelled on December 27 after more than 2,800 were dropped over the weekend, according to data from FlightAware.com. One of the hardest-hit carriers was Alaska Air Group Inc, whose operations at its main base at Seattle-Tacoma International Airport were affected by snowfall and some of the region’s coldest temperatures in years.
An omicron-fuelled wave of Covid cases remains a concern, weighing on airline shares. United Airlines Holdings Inc said it cancelled about 2.9% of its scheduled flights due to Omicron-related staffing issues. Airlines have taken various steps to prevent infections among their crews, including a vaccine mandate at United and a monthly surcharge for unvaccinated employees at Delta Air Lines. Major airlines have said most of their employees have been vaccinated.
Anthony Fauci, a top medical adviser to President Joe Biden, said earlier that a domestic-travel vaccination rule should be considered to curb the spread of the virus on airplanes. Studies have shown that people who get three doses of certain Covid-19 vaccines have protection against Omicron, although breakthrough infections are becoming increasingly common. The Airlines for America lobby group said it’s been told that such a mandate isn’t coming in the near term.
An estimated 5.3 million people passed through US airport security screening during Christmas weekend, according to Transportation Security Administration data. That’s 75% more than during the equivalent period of 2020 when travel was hard-hit by the pandemic but still 30% below 2019 levels.
American Airlines scrapped 3% of flights according to FlightAware and said it had “nothing new to share” on cancellations. “Delta people are continuing to work together around the clock to reroute and substitute aircraft and crews to get customers where they need to be as quickly and safely as possible,” the Atlanta-based airline said. Southwest Airlines said it had 67 cancellations out of 3,600 flights, and none were due to Covid-19.
Sun Country Airlines cancelled all of its domestic flights because of a “temporary third-party network system outage” that required it to temporarily switch to manual processes. While the issue was resolved by midday, Sun Country said it expected delays across its system.
At Alaska Airlines, 144 flights were cancelled, or about 21% of the carrier’s schedule, according to FlightAware, and another 28% were delayed. The airline grounded 196 flights recently.
SkyWest Inc, which operates regional flights for United, Delta, American and Alaska, cancelled 314, or 13%, of its flights and an additional 24% were delayed, according to FlightAware data.
After the holidays, domestic leisure travel demand likely will slow from early January through mid-February, followed by an upturn that should last through the summer, Helane Becker, a Cowen analyst, said in a report.