United staff at Heathrow to vote on strike over pay 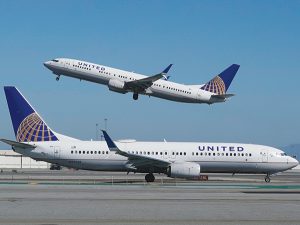 United Airlines Holdings Inc faces potential disruption in one of its most lucrative overseas markets as 300 workers
at London’s Heathrow airport begin voting in a strike ballot over pay.
The poll of staff employed in operations, customer services and baggage handling will run until October 11, the Unite union said in a statement.
United’s UK employees are in dispute with the US company over what Unite call real-terms pay cuts amid a cost-of-living crisis. It has said the carrier offered a raise of 5% this year plus an additional payment, followed by 4% in 2023, at a time when inflation is running well ahead of those figures.
“To make matters worse, bosses want to tear up a long-standing agreement barring
the use of outsourced workers,” United General Secretary Sharon Graham said. “These are red lines the workers won’t cross.”
The union said disruption at United would threaten as many as 18 flights a day into Heathrow, the top destination for US carriers in a trans-Atlantic market that’s rebounded faster from the Covid crisis than most long-haul sectors.
United Airlines continues to hold talks with Unite with a view to reaching an agreement, the Chicago-based company said in an emailed statement from its London office.
The ballot at United comes after Unite said earlier this month it would poll more than 50 Heathrow-based maintenance staff at American Airlines Group Inc on possible strikes over a pay offer it called “appalling.” That consultation closes on September 30.
In another UK labour dispute, 2,000 Arriva bus drivers in London will begin action over pay from October 4, with the walkout continuing until a resolution is reached, Unite said.
Drivers are seeking a 12.3% hike, which the union says is in line with inflation. Orsted A/S off-shore wind-farm workers based in Barrow-in-Furness and Birkenhead, northern England, will meanwhile strike for four days, according to the National Union of Rail, Maritime and Transport Workers.
The dates include October 1, when a number of stoppages are planned across a range of industries on the eve of the Conservative party conference.
Orsted said the RMT balloted 96 workers out of about 450 offshore staff and the company will continue discussions with Prospect, its recognised trade union for those workers.
The Transport Salaried Staffs’ Association said it will ballot hundreds of members at London commuter railway Govia Thameslink on possible walkouts.