UK would have to pay $17b for public sector 7% bump 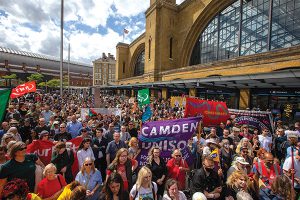 The UK government would have to pay £14 billion pounds ($17 billion) a year to give public-sector workers the 7 percent pay raise that some of them are demanding.
The figures, from an analysis by Bloomberg Economics, shed light on the options Prime Minister Boris Johnson is facing to defuse the biggest round of strikes in decades.
Rail workers and criminal barristers walked off the job in the past week to press for higher pay after inflation hit a 40-year high, and professions from teachers to local authority workers are threatening to do the same.
Johnson had urged departments to be cautious with pay increases to avoid triggering a wage-price spiral. But the issue isn’t likely to go away, with the Bank of England predicting price increases will accelerate past 11% later this year.
Rail workers who crippled public transport for much of last week are seeking a 7% pay increase. The Bloomberg report by analysts Jamie Rush and Dan Hanson suggests that meeting those demands with an increase for all of the UK’s public sector workers would cost less than the cost of the government’s recent package of measures to protect consumers from higher energy bills.
A 7% hike for the more than 5 million workers employed by the state would cost about £8 billion more than the 3 percent increase that forms the top end of the government’s previous guidance, according to BE.
In an interview published by the Times newspaper, Simon Clarke, chief secretary to the Treasury, said any department offering a larger increase than 3 percent would have to find cuts elsewhere
“Insofar as departments are going to be going above that then they’re going to have to own those choices,” he said. “Cabinet colleagues are going to have to show real discipline and ingenuity.”
If departments reduce headcount to cover the cost of the increase, it would lead to 190,000 fewer extra workers being added to the payroll over the next five years, BE said. If no new debt is issued, the rise wouldn’t contribute to overheating, the analysis said.
Despite its call for restraint in wages, the government is sticking with plans to increase the state pension in line with inflation next year. Increasing the value of those payments by 10% next year would cost £10.5 billion, the BE analysis showed.
Chancellor of the Exchequer Rishi Sunak has said that situation is different because “pensions are not an input cost into the cost of producing goods and services we all consume, so they don’t add to inflation in the same way.”
Still, some economists have countered that by pointing out the pay for UK teachers, nurses and doctors also don’t form an input cost. The services they provide are free at the point of use, which reduces the risk of a wage-price spiral.

UK Graduate Salaries Climb by 7%
Britain’s 2022 university graduates will compete for jobs with salaries 7% higher than their equivalents last year, although each one will still have to fight off 35 other applicants to secure the role.
Advertised graduate salaries have risen to a six-year high of £26,076 ($32,000) this summer, research from the job search site Adzuna showed Monday. The number of vacancies on offer has spiked 59% from a year ago. That still leaves 36 graduates competing for every job, the firm said.
The figures highlight how companies will look to graduates to help ease the tightest jobs market in decades. By offering more roles and higher starting salaries, companies may alleviate an acute shortage of workers that’s left vacancies across the economy at a record high.
The higher salaries are also a reflection of red-hot inflation, which stands at a four-decade high of 9.1% and is expected to hit double-digits later this year.
“This is the strongest jobs market we’ve seen for graduates post-pandemic,” said Paul Lewis, chief customer officer at Adzuna. “Plenty of sectors remain desperate for talent and looking to grads to fill those gaps. It’s a welcome piece of good news for the Class of 2022, who battled remote learning and pandemic pressures.”
Graduates from Bayes Business School, Oxford, Imperial College, Cambridge and University College London are top of the tree for earnings. All of their grads are likely to earn more than £40,000 after five years.