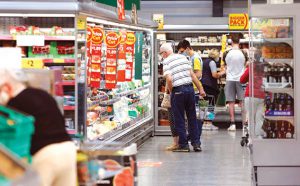 Britain’s inflation rate surged unexpectedly to the highest since 1992, sharpening a squeeze on households and adding to pressure on the government and Bank of England to respond.
Consumer prices surged 5.4% from a year ago in December, driven by a broad increase in the cost of food, restaurant meals and furniture, the Office for National Statistics said on Wednesday. Economists had expected a reading of 5.2%.
Household spending power is weakening, with the price of everyday goods and services rising faster than wages. Policy makers at the central bank are weighing another increase in interest rates as early as next month, and ministers are looking at ways to soften a surge in utility bills due to hit in April.
“Rising inflation means that Britain’s cost of living squeeze will continue to get tighter over the coming months, particularly when energy bills jump in April,” said Jack Leslie, senior economist at the Resolution Foundation think tank. “The drivers of inflation are becoming more broad-based.”
The strength of inflation is fanning speculation of a rapid cycle of tightening for monetary policy. Strong figures from the jobs market reinforced that outlook. The BOE last month delivered the first increase since the start of the pandemic and may move again on February 3.
UK government bonds slid, with 10-year yields rising 8 basis points to 1.30%, the highest since early 2019. Money markets have almost fully priced in rate-hike next month.
“I understand the pressures people are facing with the cost of living, and we will continue to listen to people’s concerns as we have done throughout the pandemic,” Chancellor of the Exchequer Rishi Sunak said.
Households are feeling the squeeze not just from rising energy bills, but higher food prices. Energy bills have risen 18.8% for electricity and 28.1% for gas, the biggest increases since 2009. Food prices are now climbing at their fastest rate since July 2008.
“Rising inflation poses tricky questions for the Bank of England,” said Yael Selfin, chief economist at KPMG UK. “Shortages of goods, demand for which rose during the pandemic, and high energy prices have both contributed to quickening the pace of price rises.”
The monthly increase was driven by food and non-alcoholic beverages, restaurants and hotels, furniture and household goods, and clothing and footwear. That suggests price gains moved beyond energy, which is due to hit consumer bills again starting in April.
The retail price index, used to set payouts on gilts and for pricing public services including train fares, surged 7.5% from a year ago, the most since 1991. That’s more than the 7.1% pace that economists had expected.
In one encouraging sign, pipeline price pressures appeared to ease in December. The cost of fuel and raw materials used by factories unexpectedly falls, and prices charged rises less than forecast.
Core CPI, which excludes energy, food and other volatile items, accelerated to 4.2%, the highest since 1992.
Inflation averaged 4.9% in the fourth quarter, higher than 4.3% forecast by the Bank of England. For December alone, the BOE had predicted a rate of 4.5%.