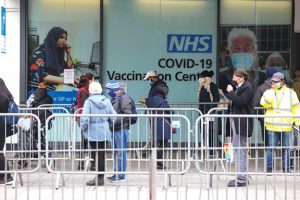 The coronavirus pandemic, marked by an ambitious vaccine rollout, has cost the UK government an estimated £376 billion ($459 billion).
The figure released by the National Audit Office has increased by £6 billion over the last ten months, with much of the expense going to support train traffic even as the passenger numbers dwindled.
The amount — more than the annual gross domestic product of a country like Austria — grew amid measures to administer vaccines, test and trace contact cases, and alleviate pressure on hospitals by improving patient discharge. The cost is estimated to be similar in neighbouring France after governments across Europe opted to strain their finances to support the economy through the crisis.

UK Inflation Rises to New 40-Year High
UK inflation rose to a fresh four-decade high in May after broad increases in the cost of everything from fuel and electricity to food and beverages.
The rate accelerated to 9.1%, from 9% a month earlier, the Office for National Statistics said.
Retail prices climbed more than expected to 11.7%, and there were also more signs of inflationary pressures building at the wholesale level, with raw material costs increasing the most on record.
While the jump was smaller than seen in recent months, the figures still underline the scale of the inflation crisis facing the UK. Matters will get worse later this year when another energy price hike kicks in, with the Bank of England forecasting price gains will surge above 11% in October.
The increase was driven by rising prices for food and non-alcoholic beverages, which formed a stark contrast to declines a year ago. Rising electricity and gas and other fuel prices, motor fuels and second-hand cars were also big contributors to the headline figure. The cost of goods leaving factories rIse 15.7% from a year ago, a full percentage point stronger than expected and the most since 1977.
Raw materials prices jumped 22.1%, also more than expected and the most since records started in 1985.
The runaway inflation rate is setting the backdrop for a tumultuous summer for the central bank and Prime Minister Boris Johnson’s government. About 60% of adults report spending less on non-essential items in response to rising costs.
“I know that people are worried about the rising cost of living, which is why we have taken targeted action to help families,” said Chancellor of the Exchequer Rishi Sunak. “We are using all the tools at our disposal to bring inflation down and combat rising prices.”
Sunak said that “fiscal policy which doesn’t add to inflationary pressures” will be part of the solution, a signal government will keep a tight rein on pay settlements with the public-sector workers.
The economy is on course to shrink for the first time since the pandemic, consumers are seeing their incomes squeezed at the sharpest pace in two decades, and a series of rail strikes are bringing the nation to a standstill this week.
While Johnson has introduced a package of measures to help offset some of the jump in energy bills, it says increasing pay to match inflation is not an option. Johnson told his cabinet that his government seeks to enforce pay restraint on public sector workers or else push prices even higher.
Meanwhile the BOE, which says it can do nothing to stop the spike in prices this year, is adding to the short-term pain of some households by hiking rates at an unprecedented pace.