UAE, Saudi non-oil trade grew by 92.5% over past decade: FCSC 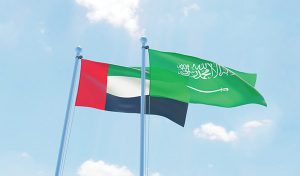 The non-oil foreign trade between the UAE and Saudi Arabia grew by 92.5 percent over the past decade to AED124.69 billion by the end of 2021, compared with AED64.79 billion by end of 2012, according to statistics from the Federal Competitiveness and Statistics Centre (FCSC).
The trade exchange between the two countries in the first half of 2022 totalled AED65.7 billion, the statistics also showed. The total value of non-oil exports from the UAE to Saudi Arabia over the past ten years was around AED205.5 billion, while re-exports were valued at AED471.7 billion, and imports at AED227 billion.
From 2012 to 2021, Saudi Arabia was the UAE’s fourth leading trading partner, with their trade exchange amounting to AED904.3 billion, or 5.6 percent of the UAE’s total international trade. Saudi Arabia was ranked first in the list of countries that received re-exports from the UAE over the past 10 years, valued at nearly AED423 billion. It was also ranked second in the list of countries receiving Emirati non-oil exports, with a value of AED206 billion, constituting 9.5 percent of the UAE’s total non-oil exports.
According to the FCSC’s figures, the trade exchange between the two countries in 2013 was AED79.9 billion, decreasing in 2014 to AED75.5 billion, and increasing again in 2015 to AED83.3 billion. The non-oil trade exchange between the two countries totalled AED71.5 billion in 2016 and AED79.2 billion in 2017. In 2018, it crossed the AED100 billion mark.
In 2019, their non-oil trade exchange was valued at AED113.2 billion.