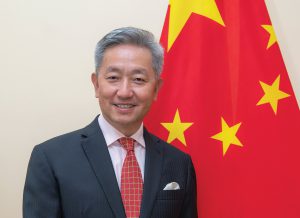 “China has become the UAE’s largest non-oil trading partner in the world, and the UAE remained China’s second-largest trading partner and the largest export market in the Arab region,” said Zhang Yiming, Ambassador Extraordinary and Plenipotentiary of the People’s Republic of China.

In an exclusive interview with WAM at the Chinese Embassy in Abu Dhabi, he emphasised that in recent years, China’s ‘Belt and Road Initiative’ is highly consistent with UAE’s ‘Projects of the 50’, and the cooperation between the two sides is getting increasingly strategic, pioneering, and innovative.

The China-GCC Free Trade Agreement (FTA) negotiations have entered the final and critical stage, as the two sides have agreed on most issues and are putting the final touches on the agreement, the ambassador revealed.

China hopes to reach a high-standard free trade agreement in the end and highly appreciates the UAE’s support for the same, Yiming stressed.

“We believe that the agreement will make the best use of the GCC countries’ favourable location and great opportunities in China’s market. It will help the GCC countries build logistics and shipping hubs covering neighbouring countries and attract more capital and technology,” the envoy explained.

The China-Arab Summit, which will be held in Saudi Arabia in December this year, will be an important milestone in the history of China-Arab relations, he said.

This will be the first such summit and the first face-to-face exchanges between Chinese and Arab leaders since the Covid-19 pandemic.

“The friendship between China and Arab countries goes back to ancient times. The two sides are good brothers, good friends, and good partners.”

UAE a gateway for Chinese enterprises to ‘go global’

Underscoring the UAE’s role as a major hub of the Belt and Road Initiative and a regional aviation, transportation and financial centre, the envoy said it is an important gateway for Chinese enterprises to “go global” and a popular destination for Chinese tourists.

“China stands ready to work with the UAE as a good partner for common development and joint progress. The UAE is welcome to ride on the ‘fast train’ of China for coordinated development and interconnected growth,” the ambassador asserted.

The cooperation between China and the UAE in science and technology has drawn close attention of the international community, Yiming noted.

Two months ago, the ambassador presented the Chinese Government Friendship Award to Dr Nawal Al Kaabi, a paediatrician and infectious disease consultant and the Chair of the Seha infectious diseases and infection Control council.  “As a leader and chief clinical expert in China-UAE vaccine cooperation, Dr. Al Kaabi is the first Emirati friend to receive this honour,” the envoy emphasised.

Recently, the aerospace authorities of China and the UAE signed a memorandum of understanding (MoU) on the mission of the lunar rover named Rashid, which has become the most-searched news on social media in China, he said.

“There will be a series of space cooperation in the future. Our high-tech cooperation in artificial intelligence, 5G telecommunication and genetic technology are making good progress.”

Cooperation in aviation, tourism the air connectivity and tourist traffic between both countries are growing after the pandemic, the ambassador said.

“At present, the number of direct flights between China and UAE has increased significantly,from one to two flights per week at the peak of the pandemic to 26 flights per week now, and the frequency will continue to increase.”

It is undeniable that tourism and people-to-people exchanges between the two countries have been affected by Covid-19, but thanks to the joint efforts of the Chinese and UAE governments, Etihad Airways became the first international airline to resume direct flights to the three major cities of Beijing, Shanghai, and Guangzhou, which is very significant, Yiming explained.

Before the pandemic, the number of Chinese tourists ranked fourth among international tourists visiting the UAE, and they ranked first among the top spenders, he pointed out.

“As the UAE is about to enter its peak tourist season from November, I believe that Chinese tourists will come soon in large numbers and tourism will become a new driving force for both countries. UAE friends are welcome to visit China to travel and enjoy the hospitality of the Chinese people,” the ambassador said.