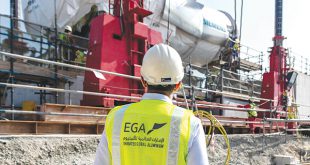 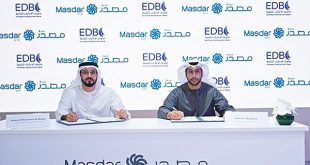 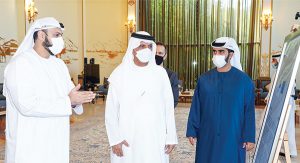 His Highness Sheikh Saud bin Saqr Al Qasimi, Supreme Council Member and Ruler of Ras Al Khaimah, affirmed the role of tourism as the essential underpinning of the UAE’s sustainable development.
His Highness’s comments came as he was presented with a commemorative postage stamp bearing the image of Jebel Jais, the UAE’s tallest mountain, from Emirates Post Group, with the presentation taking place in the presence of Sheikh Saqr bin Saud bin Saqr Al Qasimi.
Issued in cooperation with Ras Al Khaimah Tourism Development Authority, the new stamp celebrating the UAE’s highest peak is a testament to the Emirates Post Group’s commitment to promoting the UAE’s tourism sector and highlighting the country’s most prominent historical, cultural, natural, archaeological, and tourist attractions.
HH Sheikh Saud said, “Documenting the natural wonder that is Jebel Jais is indicative of the UAE’s prominent position on the global tourism map, and it strengthens the ambitious resolve of our dear emirate to progress in this sector. I praise the efforts of Emirates Post Group to help enhance the country’s position and global reputation in the tourism sector, as well as its important role in documenting the landmarks of the UAE and its contribution to advancing our overall growth and progress.”
Abdulla Mohammed Alashram, Group CEO of Emirates Post Group, said, “We are honoured to present this commemorative stamp to the Ruler of Ras Al Khaimah. Through the directives of our wise leadership, Jebel Jais has become an agricultural and environmental hub that reflects Ras Al Khaimah’s aspirations.
Formed more than 70 million years ago in the eastern part of Ras Al Khaimah, the commemorative stamp bears the image of Jebel Jais, the highest peak in UAE and a part of the magnificent Al Hajar Mountains range. It is also a major tourist attraction that promotes Ras Al Khaimah’s tourism and natural diversity.”
Alashram added, “We are pleased to have collaborated with Ras Al Khaimah Tourism Development Authority in this latest commemorative issuance that represents a unique addition to our ever-expanding collection that celebrates our country’s vast array of offerings. On this occasion, we reaffirm our commitment to leveraging commemorative stamps as tools to document our rich history and cultural heritage, highlight the UAE’s tourist and natural attractions, and showcase the nation’s journey towards global leadership.”
The latest set of stamps showcase the peaks of Al Hajar Mountain Range, and most prominently, the picturesque 1,934-metre Jebel Jais, which is known for its varied terrains. This mountainous area is ideal for mountain picnics, cycling, and other adventures. Jebel Jais is also famous for its unique climate, maintaining a temperature of 10 degrees Celsius cooler than sea-level climates during summer. Moreover, the area experiences a sharp drop in temperature and sometimes even snowfall during winter.
Jebel Jais is one of the UAE’s most important tourist destinations. It attracts visitors and tourists who avail themselves of various packages of activities and adventures. The packages include the Jebel Jais Flight adventure, officially declared by the Guinness World Records in 2018 as the longest zipline in the world with a length of 2,832.88 metres at an altitude of 1,680 metres above sea level. The mountain also features the Bear Grylls Explorers Camp, which allows visitors to live with nature and stay in cabins equipped with all personal necessities.