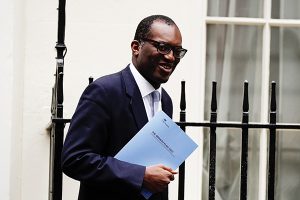 For all the talk of tax cuts in UK Chancellor of the Exchequer Kwasi Kwarteng’s mini budget last week, the most significant stealth tax imposed by his predecessor Rishi Sunak remains very much in place.
In his spring budget of 2021, Sunak sought to offset the cost of the pandemic with a four-year freeze in income-tax thresholds. Ordinarily, these thresholds rise in line with inflation to preserve the real value of your income. When they don’t, people’s real spending power falls.
Consider someone who earned exactly last year’s threshold of £12,570 ($13,476) and consequently paid no tax. This year, their pay maybe rose 9.9% to match the latest CPI reading. They’d now earn £13,814, but are no better off in real terms. If the tax threshold remains at £12,570, they will now pay £248 of tax (20% of this year’s pay increase) and will be worse off as a result.
With inflation much higher than Sunak originally expected, the Institute for Fiscal Studies estimates that this so-called fiscal drag will cost taxpayers around 30 billion pounds ($32.5 billion).
But the income-tax thresholds weren’t the only allowances to be frozen in that fateful 2021 budget. The capital gains tax (CGT) and inheritance tax (IHT) thresholds were also frozen, as was the pensions lifetime allowance. Liz Truss’s new government has kept all of these in place. This makes tax planning simultaneously more important and complicated.
For the Treasury, the benefit of freezing the thresholds is relatively simple. Inheritance-tax receipts rose to £6.1 billion in 2021-2022, up 14% on the previous year. Capital gains tax, meanwhile, contributed £14.3 billion to Treasury coffers, an increase of 42% on the previous year. (To be fair, it wasn’t just fiscal drag that boosted CGT revenue. Certain business reliefs were cut and buy-to-let landlords also paid a lot more CGT as they exited the property market.)
For taxpayers, the frozen thresholds make it even more important to carefully plan for long-term investment goals such as retirement.
Pension contributions generally attract relief at a person’s marginal tax rate. For someone earning less than £50,270 a year, every £80 that they contribute to their pension is topped up by an additional £20 of tax relief to bring the total to £100 . For those earning above £50,270, the relief is even more generous: A £60 contribution draws £40 of relief.
When it comes to retiring, however, drawing down one’s pension may be tax-efficient, but it is not tax-free. Generally, you can withdraw a quarter of your pot tax-free, but the rest is taxed as earned income and this is where the frozen income-tax thresholds add to the bite. When these are frozen, withdrawing more money from your pension pot to compensate for inflation will inevitably mean paying more tax.
Pensions still remain a good deal, and the vast majority are completely unaffected by the gilt market volatility that so stressed the providers of lucrative, but increasingly rare, final salary pensions. But there is a limit to how much tax relief the government will grant an individual. Any pension savings above the rather arbitrary sum of £1,073,100 are taxed at 55% if you take out the money as a lump sum. If you withdraw the excess as regular income instead, you pay a 20% penalty on top of your marginal income-tax rate.
—Bloomberg