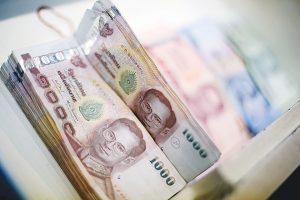 Thailand’s central bank and the finance ministry will soon meet to discuss the baht after it tumbled to the lowest in nearly 16 years, signalling growing concerns among officials that the currency slump can threaten a tepid recovery and stoke inflation.
The ministry and Bank of Thailand (BOT) will discuss the baht’s weakness as the nation needs “to seek balance” in the currency, Finance Minister Arkhom Termpittayapaisith said. Arkhom’s comments came after Deputy Prime Minister Prawit Wongsuwan told the finance ministry to closely monitor the currency.
Prawit, who’s also the acting prime minister, wants baht back to 35 to a dollar as he’s concerned about the recent volatility and has asked Arkhom to hold talks with the BOT.
However, the finance minister told reporters that the country couldn’t set a level for baht as it’s driven by market mechanism.
Bank of Thailand didn’t immediately respond to requests for comments.
The central bank said it’s closely monitoring the baht and may take steps, adding that US dollar strength due to the Federal Reserve’s aggressive tightening is affecting neighbours too. Last week, policy makers in Asia pushed back to stem declines in their currencies, with South Korea ramping up its rhetoric and Japan said to be calling banks for an indicative price at which it can intervene.
The baht’s plunge has rattled Thai policymakers with the net oil importer already struggling to contain the highest inflation in 14 years. While a weak local currency is seen as helping exports and tourism — the bright spots in the economy — sticky inflation is eroding purchasing power and hurting the poor.
The baht fell as much as 0.6% to 37.184 to a dollar, the lowest since October 2006. It’s lost 1.5% in the past five days, the most among major Asian currencies.
The slump in the currency couldn’t come at a worse time for the government, with the general elections set to be called early next year.
The Bank of Thailand has adopted a hands-off stance towards the baht, insisting its role is limited to curbing extreme volatility. While it has raised the policy rate by 25 basis points, Governor Sethaput Suthiwartnarueput said last month that it will stick with its “gradual and measured” approach.