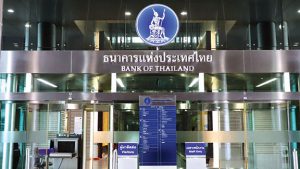 Thailand’s central bank held its benchmark interest rate unchanged for a 13th straight meeting to assess how much risk the omicron variant poses to a fragile economic recovery.
The Bank of Thailand’s (BOT) rate setting committee voted unanimously to hold the one-day bond repurchase rate at a record-low 0.5%, as predicted by all 20 economists in a Bloomberg survey. The central bank also lowered its forecast for next year’s gross domestic product growth to 3.4%, from 3.9% previously, while boosting the 2021 expectation to 0.9% from 0.7%.
The Monetary Policy Committee “assessed that the omicron outbreak would affect the economy in early 2022,” the central bank said in a statement announcing its decision. “The impact could be more severe and prolonged than expected due to downside risks such as the severity of the outbreak and the strictness of corresponding containment measures.”
Prime Minister Prayuth Chan-Ocha this week halted the country’s quarantine-free entry program after less than two months, citing concerns that tourists could spread the omicron strain. BOT Governor Sethaput Suthiwartnarueput said last week the new virus variant poses a risk to the recovery, and that additional variants in the future could impact growth estimates if they derail projected tourist arrivals.
Thailand’s vaccination program has accelerated in recent months, with 70% of the population receiving at least one dose and 62% getting two. New infections dropped to 2,532 cases Wednesday, compared with its peak of more than 20,000 in August. The nation has detected 104 omicron cases since the first case was confirmed earlier this month.
“On the plus side, economic activity looks to have bounced back strongly in the final quarter of the year, after the government eased restrictions in response to a fall in cases of Covid-19,” said Gareth Leather, senior Asia economist at Capital Economics Ltd. “However, the first quarter of next year is likely to be a lot weaker than we had previously envisaged.”
The committee noted that headline inflation had risen temporarily due to supply-side factors, particularly energy prices, but that these were expected to subside in the second half of 2022.
“The likelihood of second-round effects remained low due to limited cost pass-through given the slow economic recovery as well as weak employment and labour income,” the statement said. “Nevertheless, the Committee assessed that headline inflation would be subject to upside risks given higher global inflation and thus warranted close monitoring.”
In a briefing after the decision, Assistant Governor Piti Disyatat said baht weakness has helped improve exporters’ margins and has had only a limited impact on inflation for now, though the central bank will monitor the situation closely.