China’s wind turbines to get even cheaper over price war 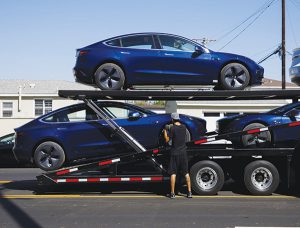 Tesla Inc is expected to announce record quarterly deliveries as the electric-vehicle giant tries to recover from supply-chain snarls that crimped output earlier this year.
The totals are poised for release this weekend once Tesla finishes sales, the last day of the quarter. Deliveries are one of the most closely watched metrics by investors, underpinning Tesla’s financial results and offering a barometer for consumer demand for EVs.
Tesla is looking to maintain its position atop the market as upstarts and established carmakers rush into the EV space to capitalise on the shift away from internal combustion engines. The Texas-based company has been boosting production at its newest factories in its home city and near Berlin.
Global third-quarter deliveries may have reached nearly 358,000 vehicles, according to 16 analysts surveyed by Bloomberg. That estimate does not include some of the more recent analyst projections.
“We believe that Giga Austin’s increasing rate of production as well as the continuing ramp at Giga Berlin position TSLA to beat delivery estimates globally,” Ben Kallo of Robert W. Baird said in a research note, referring to Tesla by its ticker symbol. Kallo expects total deliveries of 385,000 units.
Anywhere close to the consensus figure would mark a record for Tesla, whose previous delivery high was just over 310,000 at the beginning of this year. Handovers fell sharply in the second quarter due to Covid-related shutdowns in Shanghai, part of broader challenges that Chief Executive Officer Elon Musk has referred to as “supply chain hell.”
In an internal email that emerged this week, Musk implored employees to help with a “very high volume of vehicles to eagerly waiting customers during the final days” of the quarter.
The company, which releases delivery and production totals within three days of the quarter’s end, reports global figures. Many of the world’s automakers will announce US results on Monday.
Tesla makes the Model S, X, 3 and Y vehicles at its plant in Fremont, California, and produces Model 3 and Y at a factory near Shanghai. It has begun delivering the first Model Ys from the Berlin and Austin facilities. Tesla plans to make almost 495,000 Model Ys and 3s in the fourth quarter as part of its push to ramp up production, Reuters reported.
It will probably be a busy weekend for Tesla, which also plans to host its second “AI Day” in Palo Alto, California, on Friday evening. The event, which is aimed at recruiting engineering and robotics talent, will feature updates about self-driving technology, Tesla’s humanoid robot and Dojo, the supercomputer that could be used to help improve vehicle automation.